Canadian Solar Inc. (CSIQ - Free Report) recently entered into a long-term power purchase agreement (PPA) with Axpo Italia, which will enable the latter to buy electricity worth 12 megawatt-peak (MWp) from two solar plants in Italy. Canadian Solar’s high-efficiency modules will be installed in these two facilities, which boast an estimated annual production of approximately 22 gigawatt-per-hour (GWh).

The latest deal is part of a broader framework agreement between Canadian Solar and Axpo Italia, struck in November 2020, under which they pledged to sign up to 300 MWp of PPAs in the country.

With the entire world making a shift toward renewables, Italy is no exception. In its National Energy and Climate Plan, the nation set a target of installing 52 GW of solar capacity by 2030, almost 2.5 times the 20.9 GW installed by 2019.

Such an ambitious target naturally indicates enhanced growth opportunities for solar players like Canadian Solar. The latest signed PPA by the company, which is one of the first private PPAs signed in the Italian market, further confirms this fact.

Moreover, Axpo Italia currently is the third largest operator in Italy’s free energy market. So, a partnership with this firm is expected to enable Canadian Solar significantly expand its footprint in the growing solar market of Italy.

In fact, Italy is also one of Canadian Solar's key markets in the Europe, Middle East and Africa (EMEA) region, with the company aimed at executing its solar pipeline in excess of 1.3 GWp in the country. The latest PPA with Axpo Italia should put Canadian Solar a step forward in achieving this target.

The reviving solar market is encouraging major solar industry players to engage in strategic partnerships to enhance their footprint worldwide.

Last week, Sunrun (RUN - Free Report) entered into a partnership agreement with Ford Motor Company (F - Free Report) to provide Intelligent Backup Power solutions to its customers. With this deal, both companies will provide customers a chance to install a solar and battery system at home and charge up their household with clean and affordable energy along with charging their F-150 Lightning with solar power.

In March, Enphase Energy, Inc. (ENPH - Free Report) announced its partnership with Florida’s Urban Solar, which involves construction of a large-scale commercial solar system with a capacity of 719 kilowatts (kW). The facility will provide electricity to the Praxis of Deerfield Beach senior living community in Deerfield Beach, FL.

Shares of Canadian Solar have gained 110.7% in the past 12 months compared with the industry’s 64.3% surge. 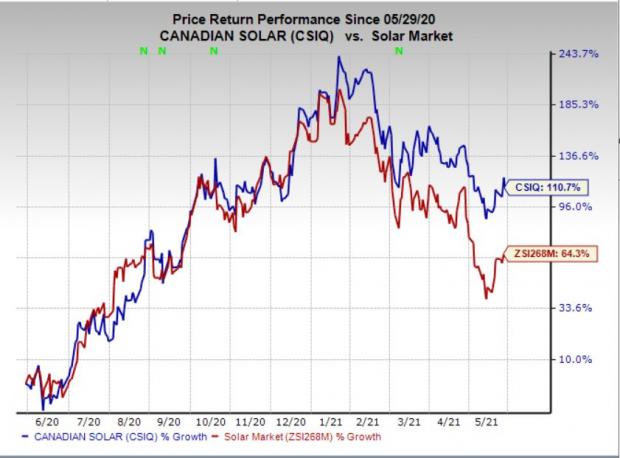