Notably, Nurtec ODT was approved as a treatment of acute migraine in February 2020. Following the latest approval, Nurtec ODT became the first and the only drug indicated for treating acute episodes of migraine attacks as well as to prevent future occurrences of migraine.

The latest FDA approval for Nurtec ODT was based on data from a double-blind, placebo-controlled phase III study which evaluated Nurtec ODT as a preventive treatment of migraine. Data from the study showed that treatment with Nurtec ODT decreased monthly migraine days by 4.3 days/month as compared to placebo following three months of treatment (primary endpoint).

Moreover, a greater proportion of patients in the Nurtec arm achieved at least 50% reduction in the number of moderate-to-severe migraine days per month compared to placebo – a key secondary endpoint of the study.

Shares of Biohaven have lost 3.7% so far this year compared with the industry’s decline of 4.9%. 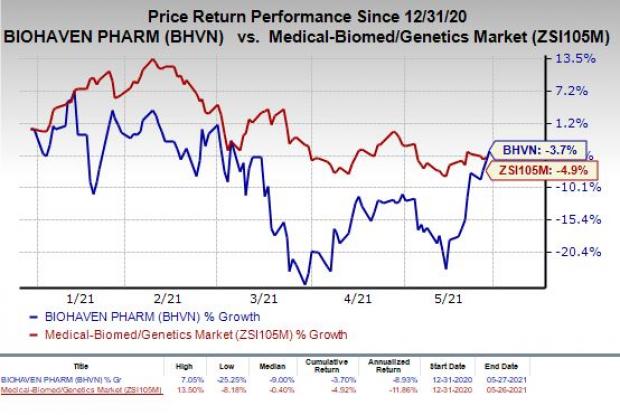 Nurtec ODT was launched as an acute treatment of migraine in March last year. It recorded sales worth $43.8 million in the first quarter of 2021, up 24.8% sequentially. The drug’s sales were driven by growth in the oral CGRP segment as well as increase in market share of Nurtec ODT as a migraine therapy.

The label expansion as a preventive migraine treatment should further boost the drug’s sales in future quarters of 2021 and beyond.

Notably, a regulatory application seeking approval for rimegepant as potential acute as well as preventive treatment for migraine is under review in Europe. The company’s planned commercial name for rimegepant in Europe is Vydura.