The S&P 500 ended last week right below its all-time highs and the Nasdaq popped around 1.5%, as bullish investors keep pushing the tech-heavy index back above its 50-day moving average. The market was more subdued Monday, with the Nasdaq up 0.50% during regular hours and the benchmark index down around 0.08%.

Last week’s positivity followed May’s jobs report that fell short of economists’ expectations but marked a significant improvement from April’s huge miss. Wall Street appeared to take the jobs data, which showed signs of ramped up hiring amid the economic reopening, as the best of both worlds. The unemployment rate fell but the pace of job additions might not force the Fed to curb its easy money policies.

Meanwhile, the overall earnings picture continues to improve for the second quarter. And the growth outlook for S&P 500 earnings reflects true growth compared to the pre-coronavirus period in FY19, which helps provide support for the broader bullish sentiment that has helped the benchmark index climb about 30% from its February 2020 levels and push it to new heights in 2021 (also read: Q2 2021 Earnings Season Preview).

Given this backdrop, investors might want to consider adding new stocks to their portfolios even during low-volume summer months. Today we dive into three highly-ranked Zacks stocks with strong outlooks that are still trading well below their records even as the S&P 500 sits just off its highs… 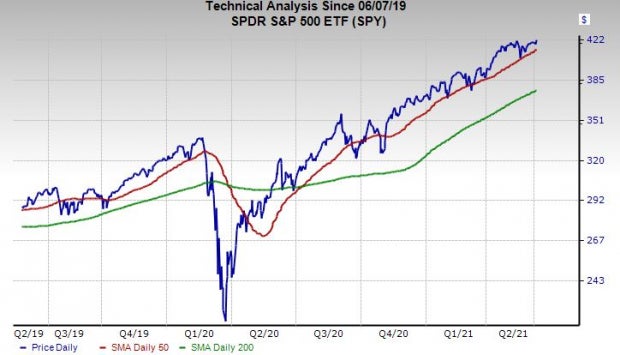 APPS has also prepared for the future through acquisitions, including its Mobile Posse purchase last March. The firm then acquired AdColony at the end of April, adding proprietary video technologies and rich media formats that deliver “industry-leading third-party verified viewability rates for well-known global brands, such as Disney (DIS - Free Report) ."

Digital Turbine has announced and completed other acquisitions in the last several months that help provide an “opportunity to significantly increase” its share of the “$300+ billion mobile media advertising market.”

The tech company that has landed on Deloitte's Technology Fast 500 list multiple times topped Zacks Q4 FY21 estimates on June 1, with its revenue up 126% to top FY20’s 34% jump. Zacks estimates currently call for the firm’s revenue to skyrocket 258% from $314 million to $1.1 billion this year. APPS is then projected to follow up these acquisition-driven years with 30% higher growth in FY23.

At the bottom end, its adjusted earnings are expected to surge 111% and 52%, respectively during the next two years. The nearby chart also showcases how much analysts have raised their bottom-line estimates to help APPS land a Zacks Rank #1 (Strong Buy), next to its “A” grades for Growth and Momentum in our Style Scores system. On top of that, four of the five brokerage recommendations Zacks has for Digital Turbine are “Strong Buys.”

APPS went on a massive run off the lows last March from under $7 a share to around $100 earlier this year. Digital Turbine has fallen back to Earth since then as Wall Street sold pandemic high-flyers. The pullback has provided a healthy recalibration on the mobile app technology company. And buyers jumped back in after the stock had fallen nearly 40% from its highs, with it now up over 25% since May 13.

Digital Turbine, which popped again Monday, still trades roughly 30% below its records and its RSI of 58 comes in underneath overbought levels (70) despite its recent resurgence. Therefore, investors looking for a growth-focused tech play might want to consider buying APPS because it also trades at a 35% discount to the broader technology sector at 5.1X to forward 12-month sales.

Levi is ready to benefit from the grand U.S. reopening that’s underway. Wall Street expects pent-up consumer spending and the desire for a wardrobe revamp will help drive a return to growth for the historic denim maker. Investors can already see these dynamics play out in terms of price performance, with LEVI stock crushing athleisure giant Lululemon (LULU - Free Report) in 2021.

Levi, which sells various offerings for men, women, and kids under its namesake brand, Dockers, and others, is expanding beyond jeans. CEO Chip Bergh has said he expects half of Levi’s revenue to come from “products that are not denim bottoms” over the next decade, up from 11% in 2015 and 21% in 2020. And Levi has beefed-up partnership with Target (TGT - Free Report) .

The company’s Q1 sales still slipped, but its guidance calls for a return to growth. Levi’s Q2 sales are projected to skyrocket 144% against an easy-to-compare period last year, with its adjusted earnings expected to swing from an adjusted loss of -$0.48 to +$0.09 a share. Plus, Levi’s FY21 sales are set to climb over 24% to $5.5 billion, with another 10% growth expected in FY22 to see it reach $6.1 billion. These estimates would see Levi jump above its pre-pandemic levels of $5.8 billion. 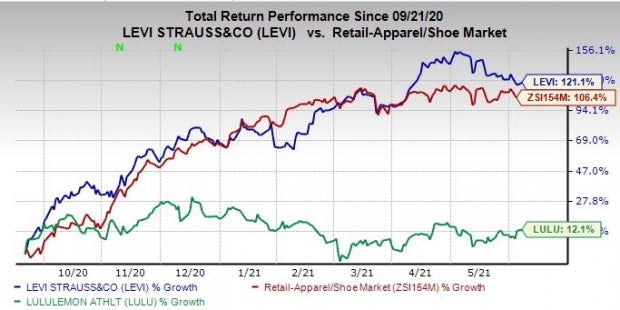 Meanwhile, its adjusted earnings are projected to soar by 430% to $1.11 a share in 2021, with FY22 set to climb 20% higher. Levi’s bottom-line revisions positivity helps it grab a Zacks Rank #1 (Strong Buy) at the moment. And the company has beaten Zacks adjusted earnings estimates by an average of 55% in the trailing four periods.

Levi struggled following its return to the public markets in 2019, as investors feared denim was fading amid the rise of athleisure. But fashion is cyclical and the pandemic could have shaken up the way people want to dress as they return to their more normal lives.

In fitting with today’s theme, LEVI has pulled back roughly 13% from its early-May records. The drop has pushed it below neutral RSI (50) levels at 42. The stock also trades nearly in line with its highly-ranked Retail-Apparel and Shoes industry at 21.4X forward earnings.

Plus, Levi management raised its dividend for the second quarter, and all four of the brokerage rankings Zacks has for the stock are either “Strong Buys” or “Buys.” And the stock popped around 1.3% during regular hours Monday.

Purple Innovation is a mattress company that competes against other direct-to-consumer focused players such as Casper Sleep (CSPR - Free Report) and Leesa. PRPL went public a few years back by merging with a publicly traded special purpose acquisition company, or SPAC and it hopes its unique offerings help it compete against giants like Tempur Sealy International (TPX - Free Report) .

Purple’s proprietary gel technology, called Hyper-Elastic Polymer helps it stand out in a crowded space. The company’s offerings include mattresses, pillows, seat cushions, bed frames, and more. PRPL’s products can be ordered directly online and found in various stores and showrooms. Its DTC e-commerce business boomed during the coronavirus, with its FY20 revenue up 51% to top 2019’s 50% and FY18’s 45% sales expansion.

Purple posted its Q1 results in mid-May, with revenue up 52% and DTC sales 55% higher. The company’s gross margin also jumped to 46.9% from 43.5%. Analysts lifted their longer-term earnings guidance following its release to help PRPL grab a Zacks Rank #1 (Strong Buy), accompanied by its “A” grade for Momentum in our Style Scores system.

Investors should know that PRPL announced on May 18 a secondary public offering of at least 7.3 million shares at $30 each, which marked a discount to its closing price of $32.20 at the time. Purple is not selling any stock and will not receive any proceeds. There is no dilution, but the stock sold off to below $30 a share given the discounted shares hitting the market.

Purple popped 4.5% on Monday to $29 a share, putting it about 30% below its February records. And the stock remains under neutral RSI levels at 44, which could give it room to run. Plus, nine of the 10 brokerage recommendations Zacks has are “Strong Buys,” with the other at a “Buy.”