The Nasdaq continued its recent climb on Thursday, while the S&P 500 jumped to new records. The positivity came despite May’s 5% jump in consumer prices that marked the highest annual inflation rate in almost 13 years.

CPI jumped 5% last month to top April’s 4.2% rise that brought about increased inflation worries and a wave of selling. Yet Wall Street has shrugged off those fears in the last month as bulls push the benchmark to new highs and the tech-heavy index within striking distance of its records.

The positivity might mean investors are betting the Fed won’t be forced to end its easy-money policies to tamp down rising prices. The central bank has stuck with its transitory line as it points out that prices are up against last year’s coronavirus lows and being impacted by supply chain setbacks, pent-up demand, government checks, and more.

Clearly, rising prices are a concern and must be monitored closely. But even if the Fed starts reversing course, interest rates will likely remain historically low, leaving Wall Street and a new crop of retail investors left to keep chasing returns in stocks.

Taking this backdrop into account, investors with longer-term horizons might want to buy strong growth-focused stocks prepared to thrive for years to come in the digital age. And why not look for ones that are still trading well below their records even as the indexes return to their highs… 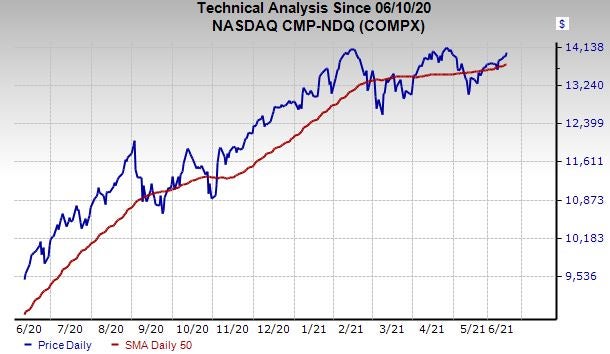 ServiceNow provides cloud-based services and solutions to nearly 7,000 enterprise customers, including around 80% of the Fortune 500. The digital workflow firm that was added to the S&P 500 index in November 2019 has expanded its partnership with Microsoft (MSFT - Free Report) to help it sell to highly regulated industries and house its full SaaS offerings on MSFT’s popular Azure cloud.

NOW has expanded its revenue by over 30% every year since it went public in 2012, including 31% growth last year. The company then topped our Q1 FY21 estimates at the end of April, with sales up 30%. ServiceNow also closed the quarter with 1,146 customers with more than $1 million in annual contract value, up 23%.

ServiceNow will benefit from the constant wave of technological innovation that forces businesses from all industries to adapt and spend to keep up. And the company announced in late March its plans to acquire robotic process automation firm, Intellibot, to help extend its “core workflow capabilities by helping customers automate repetitive tasks for intelligent, end-to-end automation.”

Zacks estimates call for NOW’s full-year revenue to climb 27% to $5.7 billion, with FY22 set to jump another 25% higher to reach $7.2 billion. Meanwhile, its adjusted earnings are expected to jump 19% and 28%, respectively.

NOW has consistently and easily topped our bottom-line estimates, including a 16% average beat in the trailing four quarters. And ServiceNow executives said last quarter that “we have strong momentum on our way to becoming a $10 billion revenue company.” 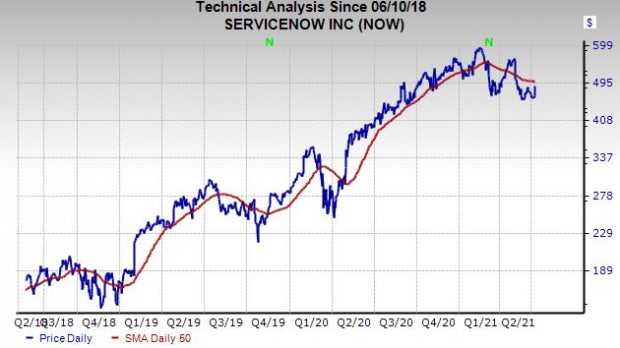 NOW has skyrocketed 560% in the past five years to blow away the Zacks tech sector’s 200% climb. Luckily for those who might have missed out, its shares have cooled off, lagging its tech peers in 2021, down 12%. The stock tumbled after its Q1 report on the back of lackluster guidance. But NOW popped 5% Thursday after Goldman Sachs put ServiceNow on its conviction buy list.

ServiceNow sits about 20% below its February records and hovers near neutral RSI levels as it attempts to climb back near its 50-day moving average. The stock is trading 15% below its own year-long median at 14.4X forward sales. And NOW lands a Zacks Rank #3 (Hold) given its stagnant EPS revisions.

Wall Street remains high on NOW, with 18 of the 23 brokerage recommendations Zacks has coming in at “Strong Buys,” with two more “Buys,” and none below a “Hold.” Therefore, investors might want to consider NOW as a growth-focused software play that’s prepared to benefit from the subscription model and the booming SaaS space alongside Salesforce (CRM - Free Report) and countless others.

The comapny's tech is also built into smart TVs and Roku was the No. 1 smart TV OS sold in the U.S. in 2020, grabbing nearly 40% market share. Roku also sells wireless sound systems that compete against Sonos (SONO - Free Report) and others.

These segments are important, but Roku’s bread and butter is its ad-heavy Platform unit that should propel growth for years. Roku makes money by selling ad space across its marketplace, as well as taking a share of streaming service’s subscription revenue and ad inventory. Roku allows marketers to buy targeted ads, promote their streaming movies or platforms, and more.

Meanwhile, the Roku Channel allows users to watch free, ad-supported streaming movies and TV shows. The firm bolstered its own offering through its January purchase of the streaming rights to all the shows from the now-defunct Quibi. And Roku’s Platform business has soared as advertisers follow consumers as they dump legacy media. Digital ad spending in the U.S. surpassed traditional outlets in 2019 and this trend is only going in one direction.

The company has also continued to boost its ad capabilities. This includes its April acquisition of Nielsen's Advanced Video Advertising business and it “entered into a long-term strategic partnership” with the historic marketing research firm and media data giant to further boost its advertising bona fides. 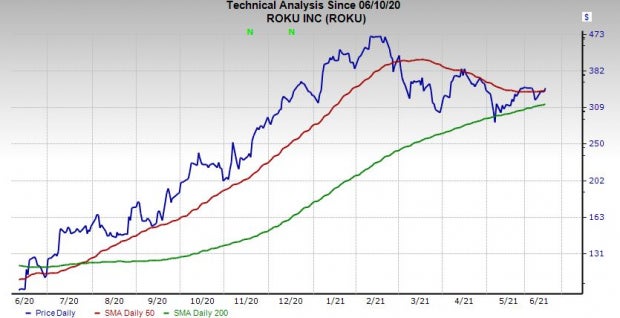 Roku provides access to an audience that marketers crave. The company said that in the first quarter “over 85% of the adult 18-49 audience reach delivered on The Roku Channel was unduplicated with traditional TV.”

Roku topped our Q1 FY21 estimates in early May, with revenue up 79%—its best since it went public in 2017. The top-line expansion was driven by a 101% surge in its ad-heavy Platform sales that accounted for roughly 80% of total revenue, after its monetized video ad impressions more than double year-over-year.

Plus, it added 2.4 million incremental active accounts to hit 53.6 million, with its average revenue per user up 32%. And it posted positive adjusted earnings for the third quarter in a row to blow away our estimates that called for a loss.

Like NOW, Roku has tumbled since it hit records in February, as Wall Street sold high-flyers. Despite the pullback, the stock is still up 200% in the last year and 740% in the past three. Roku popped Thursday as part of a nice run since mid-May. At around $350 it trades roughly 28% below its records. The stock also trades 40% under its year-long highs at 14.1X forward 12-month sales and it sits underneath overbought RSI (70) levels at 55.

Roku just popped above its 50-day moving average, which could mean it’s ready to regain some momentum. The stock currently lands a Zacks Rank #3 (Hold) but its FY21 and FY22 consensus estimates have soared since its first quarter release.

On top of that, 15 of the 18 brokerage recommendations Zacks has are “Strong Buys.” Therefore, investors might want to buy Roku as a long-term bet on streaming TV and the digital ad space.

What To Expect From The FOMC This Afternoon