So far this year, shares of H&R Block have gained 62.3% compared with 8.4% rise of the industry it belongs to. 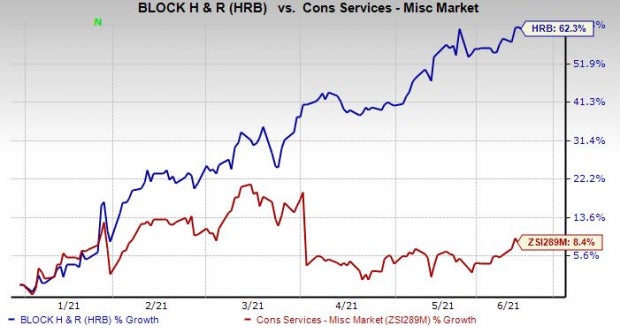 Karen Orosco has been appointed to the position of president, global consumer tax and service delivery. In her new role, she will focus on driving the growth of Global Consumer Tax. This includes leadership of more than 12,000 company- and franchise-owned tax offices in the United States, Canada and Australia, the organization’s do-it-yourself or DIY tax solutions, end-to-end tax pro experience management, tax transformation, and a consumer tax products and support team.

Orosco had joined H&R Block in 1999. Most recently, she has served as senior vice president, U.S. retail. Under her leadership, the company’s retail business launched new virtual channels and achieved its highest performance in client growth and market share in over a decade.

Bob Moretti has been promoted to the position of senior vice president of U.S. retail operations. In his new role, Moretti will lead the company’s retail tax services offered in company- and franchise-owned offices across the United States, which include more than 300 Block Advisor locations that serve small business owners.

Moretti has served the company for more than 40 years. He had joined the company as a tax pro when in college, and after graduating, became a district manager in Boston. He has served in multiple significant roles over the years. Most recently, he was monitoring Block’s franchise network of nearly 1,200 franchisees as vice president of franchise and acquisition & development.

Roxane Harris has been promoted to the position of vice president of U.S. franchise operations. She will supervise more than 2,800 H&R Block franchise locations, which include monitoring of the company’s national Franchise Leadership Council.

Previously, Harris was director of franchise operations, where she assisted franchise operators and supervised the teams offering franchise support. She had also served for 12 years as a franchise regional director, supervising a 14-state region with 330 franchise owners and 785 franchise tax offices.

Notably, Jeff Jones, H&R Block’s president and CEO, stated, “Karen’s leadership is a key reason why our assisted tax results were the best in years.” He further added, “I know both Bob and Roxane will provide leadership that brings forward new ideas and ultimately delivers more convenience and better service to our clients.”

Long-term (three to five years) expected earnings per share growth rate for Equifax, Charles River and TransUnion is projected at 14%, 15.5%, and 20.9%, respectively.