General Motors (GM - Free Report) recently announced its decision to enter into a partnership with Wabtec Corporation (WAB - Free Report) for developing and supplying the company’s Ultium battery technology and Hydrotec hydrogen fuel cell systems for Wabtec freight locomotives. The two companies have signed a non-binding memorandum of understanding, with an aim of enhancing their shared vision of a green future in the transportation sector.

Pittsburg-based Wabtec is a leading provider of equipment, systems, digital solutions and value-added services for the freight and transit rail industries, as well as other markets like the mining, marine and industrial sectors. Taking leverage of its more than 150 years of experience, the company is leading the way in safety, efficiency, reliability, innovation, and productivity. It is developing locomotives powered by electric batteries and hydrogen fuel cells in pursuit of its vision to eliminate carbon emissions in the rail industry in the United States and worldwide.

Leveraging years of application expertise, along with industry-leading performance efficiency, Wabtec has developed and tested a battery-electric locomotive called FLXdrive. Powered by about 20,000 lithium-ion battery cells, it has the potential to cut carbon emissions by at least 10%, while achieving a maximum speed of approximately 75 miles per hour.

General Motors’ Hydrotec hydrogen fuel cell power cubes are compact and easy to package, and can be used across a wide range of applications, including locomotives. Fuel Cell Systems Manufacturing LLC in Brownstown, MI, the joint-venture (JV) company established by General Motors and Honda (HMC - Free Report) , will be responsible for the production of advanced hydrogen fuel cell systems.

General Motors’ Ultium batteries are considered unique in the automotive industry. The automaker launched its first-generation Ultium Platform last year with the help of a JV with LG Chem and construction of the company’s nearly 3-million-square-foot Ultium Cells battery cell manufacturing facility in Ohio. This was followed by a second factory location for battery manufacturing in Tennessee, as well as a new JV with SolidEnergy Systems.

The introduction of batteries and hydrogen to power locomotive fleets has radically transformed the face of the rail industry. Amid the changing scenario, the latest deal will deploy General Motors’ Ultium battery and Hydrotec hydrogen fuel cell technologies to Wabtec’s freight locomotives, thus accelerating the rail industry’s path to decarbonization.

The partnership is a win-win deal for both companies. Implementation of General Motors’ technologies for the rail industry would expand the automaker’s customer base to the railway sector. In fact, the Ultium battery technology is anticipated to provide the efficiency and reliability needed for rail systems.

At the same time, the deal will provide Wabtec with a supplier of battery and fuel cells for its electric locomotives. The partnership will create a pathway to zero-emission locomotives by leveraging these two important propulsion technologies.

Wabtec will apply its experience in energy management and systems optimization to develop heavy haul locomotives that take full benefit of General Motors’s exclusive platform. In collaboration, the companies hope to couple their expertise and technology to make zero-emission locomotives an industry standard.

Moreover, the latest tie-up provides an excellent validation to General Motors’ Hydrotec fuel cell technology and the Ultium battery platform system, and further advances the auto giant’s vision of a world with zero crashes, zero emissions and zero congestion, while branching out to decarbonize other means of transportation.

Meanwhile, General Motors’ majority-owned self-driving car start-up, Cruise, has secured a $5 billion line of credit. The new credit is being provided by the automotive finance department of General Motors. This brings Cruise’s total fund reserve to more than $10 billion as it prepares for commercialization of its self-driving ride-hailing business.

The new credit will be used for purchasing General Motors’ self-driving Origin shuttle, production of which will commence at its Detroit plant in early 2023. Launched in January 2020, Origin is the company’s driverless electric shuttle, which has no steering wheel, pedals or other manual controls.

Shares of General Motors have appreciated 46.1% on a year-to-date basis, as against the industry’s fall of 3.5%. 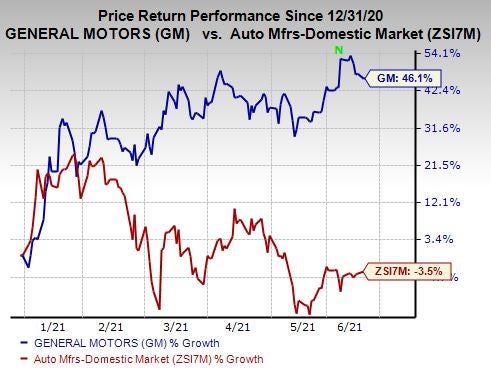