Adidas AG (ADDYY - Free Report) is eager to take on the women’s business, as evident from its increased female focus. The company has come up with a new product, namely TechFit Period Proof tights, which keeps period leaks in check. This latest product offers an absorbent layer inspired by the new Flow Shield technology, which will provide protection against leakage while wearing a tampon or pad. The TechFit Period Proof collection has been launched in stores, adidas.com and the adidas app on Jun 15.

This move is in sync with the company’s long-term Watch Us Move campaign, which aims at catering to the needs of women involved in sports. Period-proof activewear seems to be the next best step in revolutionizing its product offerings, in order to break societal barriers for women in sports.

Further, this latest development is the result of a survey, which highlighted that one in four teenage girls drop out of sports due to fear of period leakage. The study also noted the lack of awareness about periods among teens and adults. Although the scope for women in sports have been progressing, menstruation still remains a taboo for many.

As a result, management has partnered with Dr. Georgie Bruinvels and Orreco to encourage conversations about menstruation and create study materials for use in schools around the world. Apart from these, the company is also planning to invite women athletes, including Olympic medallist, Jazmin Sawyers; WNBA player, Layshia Clarendon; and others, to share their experience of training and participating during their menstrual cycle, on a global sporting stage.

Additionally, the company earlier launched several other products to capture opportunities in the women’s business. It launched its first full-cover swimwear line for women athletes and women with diverse body shapes so that everyone can enjoy being in the water. It also introduced a women’s activewear collection by the name Formotion for women who are into exercise and sports. Further, it joined hands with Peleton to launch performance wear and lifestyle products for women. Customers will also be able to access on-demand classes, available on the Peloton Bike, Bike+ and the Peloton App. Apart from these, it launched its first-ever maternity collection, including maternity 7/8 tight & maternity tank that comes with the AEROREADY moisture management technology and helps women’s bodies to move easily.

Coming back to Adidas, the company remains focused on its growth strategies to attract women customers in five core categories, including soccer, running, training, outdoors and lifestyle. In doing so, it has also started a slogan, "Own The Game", and created a cross-category plan, which aims at achieving currency-neutral net sales growth in the mid-teens between 2021 and 2025.

In the past three months, shares of this Zacks Rank #1 (Strong Buy) company have gained 4.2% against the industry’s decline of 7%. You can see the complete list of today’s Zacks #1 Rank stocks here. 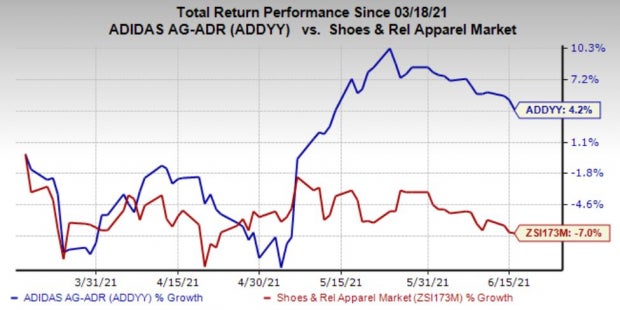