As part of its plan of establishing a banking presence in the U.K., JPMorgan Chase (JPM - Free Report) has acquired one of U.K.’s largest robo advisory firms, Nutmeg. The price of the deal has, however, not been disclosed yet.

Since its launch in 2012, Nutmeg has expanded rapidly and manages more than £3.5 billion in assets. It offers various investment accounts, including general investments, pensions and ISAs.

Notably, the deal complements JPMorgan’s plan of launching a digital retail bank (under the Chase brand) in the U.K. later this year, which is expected to offer products and features customized to meet clients’ needs delivered through an innovative mobile app.

In January 2021, JPMorgan mentioned that Sanoke Viswanathan has been appointed the CEO of the digital bank, which is headquartered at Canary Wharf, London.

In fact, the operation has already created 400 jobs in the country and plans to hire more as the business grows.

For JPMorgan, there is tough competition in the digital banking space in the U.K. Several local FinTech players like Monzo Bank Ltd. and Starling Bank Ltd. as well as large traditional banks, including HSBC Holdings (HSBC - Free Report) and Barclays (BCS - Free Report) , have been looking to expand digital offerings. Further, Goldman Sachs’ (GS - Free Report) online-only bank Marcus — which began operating in the U.K. in 2018 and has more than 500,000 customers — poses a risk to JPMorgan’s expansion efforts.

Notably, in the United States, JPMorgan has more than 50 million digital banking consumers. However, it faced a setback in digital expansion initiatives when it had to close the online-only bank — Finn — in June 2019 due to poor customer response.

Despite the hurdles, the bank is expected to continue its efforts toward digitizing operations to better align with customer needs. These efforts are expected to support the company’s profitability and boost market share amid a low interest rate environment.

So far this year, shares of JPMorgan have gained 19.4% compared with 28.9% growth recorded by the industry. 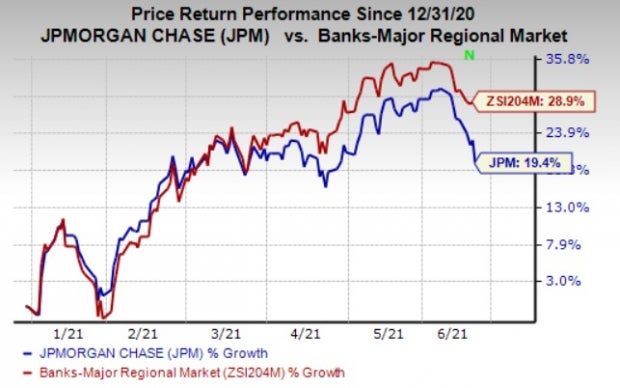