In a bid to boost the action camera ecosystem, GoPro, Inc. (GPRO - Free Report) recently launched an open API (Application Programming Interface) initiative — Open GoPro. The solution has been specifically designed to facilitate developers and third-party companies to incorporate their technologies with the HERO9 Black.

Markedly, GoPro’s HERO9 Black camera is trusted by a growing base of vlogging and travel enthusiasts, thanks to its avant-garde features like Wi-Fi + Bluetooth connectivity, compatibility with the GoPro App, 20MP camera and Max Lens Mod, to name a few.

The API will enable companies to create advanced applications that will allow customers to have a control on their GoPro cameras through First-person view goggles, smart watches and Bluetooth devices. Some of the companies that are capitalizing on Open GoPro are Pixellot and Centurion Boats.

Apart from Open GoPro, the company unveiled camera firmware update v1.6 for HERO9 Black. Available on GoPro’s official website page and Quik app, the software will be equipped with new features, some of them being improved Quik app connectivity, touch screen sensitivity and camera power on/power off speed and consistency.

Markedly, GoPro aims to translate healthy momentum in its business, along with controlled costs, into growth and profitability. The company is optimistic about its prospects, mainly on account of the strong demand for its products in end markets. It has enhanced the Plus subscription service through benefits and user awareness.

The San Mateo, CA-based company intends to transform itself from the ‘camera maker’ to ‘content maker’ and has taken significant steps to diversify into higher-margin businesses, including video editing and virtual reality. It is working more closely with its retail partners, both in North America and abroad.

It is making investments in merchandising and retail advertising to drive a bigger brand presence while continuing to innovate. Further, it aims to expand its footprint in emerging markets like India and is focused on scaling its customer relationship management efforts to broaden customer base. 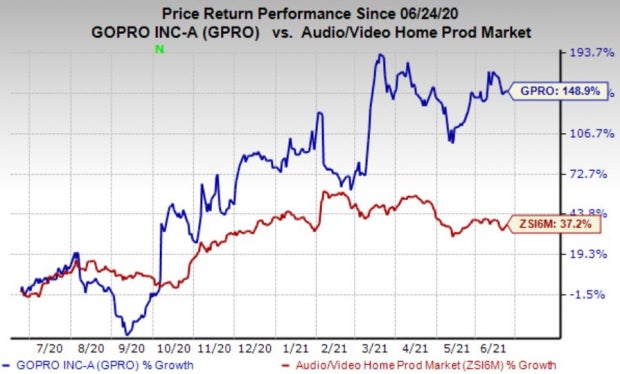 Dolby delivered a trailing four-quarter earnings surprise of 82.3%, on average.