U.S. telecom stocks witnessed a roller-coaster ride in the past five trading days on a mixed bag of ups and downs in the industry. While the sector was weighed down by the uncertainty regarding the continued chip shortage and supply chain disruptions extending beyond semiconductors, it was buoyed by an additional investment plan by chipmaker GlobalFoundries to boost production. Once the new products roll in, it is likely to ease the demand-supply imbalance that has resulted in extended lead times for basic components, crippling operations and affecting the delivery schedule of countless firms. The government also maintained an effort to set up guardrails and legislation to safeguard the interests of domestic companies, while continuously reviewing security concerns posed by China-based apps that threaten national security interests.

The U.S. Commerce Department rescinded a bevy of prohibited transactions with TikTok and WeChat that were issued last September. The move followed an executive order by President Biden earlier this month to revoke a similar such order by his predecessor that sought to ban these apps. The move was primarily intended to undertake an orderly coherent process to identify and execute corrective actions against the spread of espionage technology allegedly used by the communist nation. The Biden order further directed the Commerce Department to make recommendations within 120 days about possible steps to protect U.S. data that are already being acquired or are accessible by companies controlled by foreign adversaries.

At the same time, the FCC voted unanimously to advance the proposed ban on China-based entities like Huawei Technologies, ZTE Corporation, Hytera Communications Corp, Hangzhou Hikvision Digital Technology Co and Zhejiang Dahua Technology Co. The purported rules would prevent these telecommunications equipment providers from having their products deployed in the country. The policy measures even aim to revoke all prior approvals by the FCC against these companies and plug the loopholes in equipment authorization process to apparently shut the door against possible data intrusion efforts. Notably, Huawei alone secured 3,000 approvals since 2018. The ban would also include $1.9 billion of appropriations to replace equipment from these companies.

1.     Nokia Corporation (NOK - Free Report) has conducted a trial with Japan-based telecommunications operator KDDI to test the efficacy of sustainable networking solutions in a concerted effort to combat adverse climatic changes. The tests are likely to sow the seeds for large-scale use of environment-friendly networking solutions by carriers in order to reduce their operating costs and contribute to the CSR (Corporate Social Responsibility) initiatives.

Notably, traditional air-coolants utilized in the base stations are quite noisy and require regular maintenance for filter change and re-filling of gases. Nokia’s Liquid Cooling solution aims to eliminate this drawback by capturing heat where it is produced and converting it into liquid. This maintenance-free and virtually silent cooling solution reduces carbon dioxide emission by more than 70% compared to similar such available devices in the market, making it an ideal choice for large residential areas with several occupants.

2.     Ericsson (ERIC - Free Report) recently made significant enhancements in its Cloud RAN (Radio Access Network) portfolio with the inclusion of mid-band spectrum and Massive MIMO. Markedly, the improvement will facilitate seamless deployment of these two avant-garde solutions across a purpose-built 5G network and simultaneously support communications service providers to enable faster delivery of services on the back of their 5G spectral assets with greater network scalability and increased flexibility.

Unveiled in 2020-end, Ericsson Cloud RAN is a cloud-native software platform that manages compute functionality in the RAN. Touted as a viable option for service providers, the solution adds more versatility to network buildouts and addresses a plethora of 5G use cases. It is fully compatible with the Ericsson Radio System portfolio to support both 5G standalone and non-standalone networks. The trailblazing technology makes synchronized use of pre-integrated radios and virtualized RAN (vRAN) across all deployment scenarios including bluefield deployments.

3.     Verizon Communications Inc. (VZ - Free Report) has enhanced its location-based technology offerings with the acquisition of Senion — a Sweden-based firm that specializes in location-responsive solutions. The buyout for an undisclosed amount is likely to enable the carrier to scale up location awareness in IoT devices and harness its power to build customizable solutions with end-to-end development.

With Senion on board, Verizon aims to gain a competitive advantage by integrating the former’s indoor wayfinding, geofencing, location sharing, analytics and predictive intelligence technology with its 5G platform. In addition, the value-added solutions are likely to enable the company to offer better service to its customers and improve workflow with seamless orchestration of any space.

Unlike other broadband services available within the L-Band airwaves, Iridium Certus 200 leverages upgraded satellite constellation to offer uncompressed transmission speeds of up to 176 Kbps. In addition, it offers a maximum of three high-quality voice lines through a small, lightweight and cost-effective antenna, making it an ideal choice for a plethora of specialized broadband, mid-band and narrowband applications.

The Broadcast CDN enables digital and traditional broadcast customers to monetize their live and on-demand content and channels more efficiently. CommScope’s Manifest Delivery Controller is selected as an integral part of the overall system to provide additional functionality. 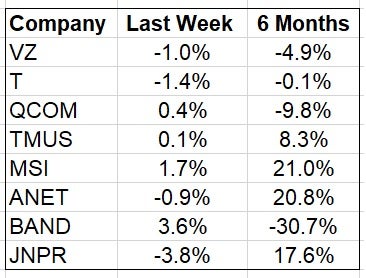 In the past five trading days, Bandwidth has been the best performer with its stock gaining 3.6%, while Juniper declined the most with its stock falling 3.8%.

Over the past six months, Motorola has been the best performer with its stock appreciating 21%, while Bandwidth declined the most with its stock falling 30.7%.

Over the past six months, the Zacks Telecommunications Services industry has gained 11.8% while the S&P 500 has rallied 15%. 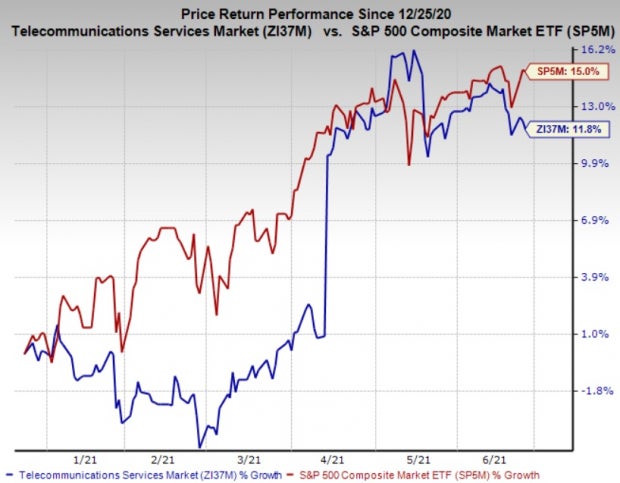