Leading satellite communications company, Iridium Communications Inc. (IRDM - Free Report) recently announced that it has clinched a $30 million worth research and development contract from the U.S. Army to develop an experimental payload on the back of Iridium Burst technology. Iridium Burst is an avant-garde service that has been specifically designed to transfer data to multiple enabled devices from space.

Markedly, the payload will be hosted on small satellite (smallsat) constellation that facilitates navigation systems for the global positioning system (GPS) and GPS-denied precision systems. This will help in establishing a seamless sensor-to-soldier data transmission path, thereby aiding armed forces in the battlefield. Backed by such focused endeavor, Iridium’s shares gained 0.7% to close at $42.20 as on Jun 28.

Interestingly, Iridium shares a strategic relationship with various government organizations, including military and disaster response agencies and non-governmental organizations to provide robust, tactical and low-latency data command and control communications on a real-time basis. It provides unrivalled mission-critical communications and maintenance services to all the military branches of U.S. Department of Defense (“DoD”) in areas where no terrestrial or wireless mode of communications are available.

In sync with this, the latest agreement is expected to not only complement the Iridium constellation's capabilities but also reinforce the long-standing partnership of DoD and Iridium on the back of state-of-the-art services like Iridium L-band broadband, voice and push-to-talk. As part of the contract, the McLean, VA-based company will be collaborating with two key subcontractors — SEAKR and Satelles — to boost the overall development of the project.

Touted as one of the largest engineering contracts in Iridium's history, the program will boost warfighter readiness to highlight the effectiveness of DoDs satellite communication capabilities, including military units and equipment. The agreement was enabled through an "Other Transaction Agreement" (OTA) with DoD authorization to streamline the process for adopting new technology solutions from various industries while undertaking prototype projects in the near future.

Supported by an efficient operating model, Iridium expects to continue benefiting from a highly lucrative recurring service revenue base driven by subscriber growth and mobile penetration. It believes in the philosophy of delivering cost-effective and competitive broadband services through its Iridium Certus technology. Its commercial business is the main source of long-term growth as it serves a diversified customer base in various regions. Further, the company’s strong product portfolio is expected to boost the top line in the long run. 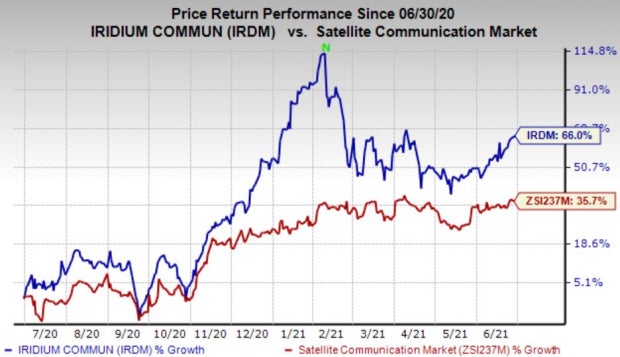 Cogent delivered a trailing four-quarter earnings surprise of 29%, on average.

Cambium delivered a trailing four-quarter earnings surprise of 46.5%, on average.

ORBCOMM delivered a trailing four-quarter earnings surprise of 35.5%, on average.