Shares of Intellia Therapeutics, Inc. (NTLA - Free Report) were up 50.21% on Monday after the company, along with its partner Regeneron Pharmaceuticals (REGN - Free Report) , announced positive interim data from the ongoing phase I study evaluating their in vivo CRISPR genome-editing candidate, NTLA-2001, for the treatment of transthyretin (“ATTR”) amyloidosis, on Jun 26. 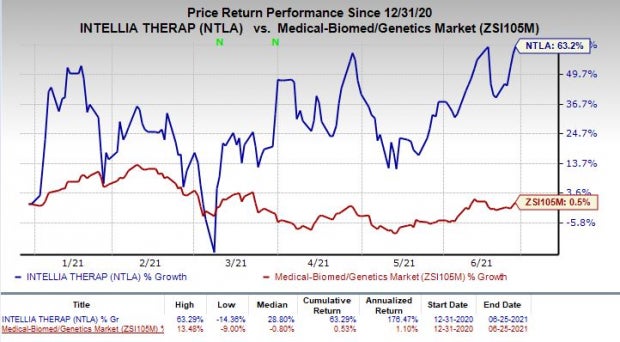 The phase I study, which is being run by Intellia, is evaluating NTLA-2001 in people living with hereditary transthyretin amyloidosis with polyneuropathy (ATTRv-PN).

Interim data from the first six ATTRv-PN patients from the phase I study showed that treatment with a single dose of NTLA-2001 (0.3 mg/kg) led to a mean reduction of 87% in serum TTR levels, with a maximum 96% serum TTR reduction by day 28, with dose-dependent response, including one patient with a 96% reduction.

Usually, the standard of care for ATTRv-PN generates TTR reductions of approximately 80%. Overall, the data showed that a single dose of NTLA-2001 has the potential to halt and reverse the devastating complications of ATTR amyloidosis.

Overall, NTLA-2001 demonstrated an encouraging safety profile with no serious adverse side effect being reported.

The above-mentioned data was published in The New England Journal of Medicine.

Per the company, this is the first-ever clinical data supporting safety and efficacy of in vivo CRISPR genome editing in humans that is precisely editing target cells within the body to treat a genetic disease with a single intravenous infusion of a CRISPR therapy. This data is being viewed as a breakthrough in gene-editing research.

Intellia has several other gene-editing pipeline candidates in pre-clinical stage. The company plans to submit an investigational new drug application for NTLA-5001 and NTLA-2002 as potential gene-editing therapies for acute myeloid leukemia and hereditary angioedema, respectively, later in 2021.

Please note that, other than Intellia, companies such as Editas Medicine (EDIT - Free Report) , CRISPR Therapeutics (CRSP - Free Report) and Beam Therapeutics are also using the CRISPR/Cas9 gene-editing technology to develop their respective candidates for addressing various ailments. Shares of these companies were also up 5%, 6.4% and 16%, respectively, on Monday.