Petrobras (PBR - Free Report) announced that it received the third and final installment of R$271.1 million by the affiliates of TechnipFMC (FTI - Free Report) as part of the leniency agreement signed in 2019.

Petrobras mentioned that it received the first two installments of the agreement in July 2019 and June 2020, which amounted to approximately R$ 578.3 million. The total payment obtained from the leniency agreements made by TechnipFMC and other companies accused of corruption exceeded R$6 billion with the final installment.

According to Petrobras, it received the settlement and compensation payments due to its position as a crime victim investigated in Operation Car Wash. Notably, Operation Car Wash is known as the largest corruption scandal in Brazil, wherein government and business officials have been accused of taking bribes for significant Petrobras contracts.

In 2019, the U.S. Department of Justice informed that TechnipFMC and its subsidiary, Technip USA, Inc., were accused of paying bribes in exchange for lucrative Petrobras contracts. TechnipFMC agreed to pay a combined fine of more than $296 million to resolve corruptive charges with the United States and Brazil authorities.

Several companies in Brazil also signed similar agreements with authorities after being accused of paying bribes to acquire Petrobras contracts as part of the Car Wash investigation. In fact, more than $1 billion was retrieved by Petrobras in cooperation, leniency and repatriation agreements this year.

Notably, Petrobras commits to adopt necessary measures to seek adequate compensation for the losses that were caused.

Petrobras is the largest integrated energy firm in Brazil and one of the biggest in Latin America. Its activities include exploration, exploitation and production of oil from reservoir wells, shale and other rocks. Further, it comprises refining, processing, trading and transportation of oil and oil products, natural gas, and other fluid hydrocarbons beside other energy-related operations.

Shares of the company have outperformed the industry in the past three months. Its stock has gained 45.8% compared with the industry’s 1% growth. 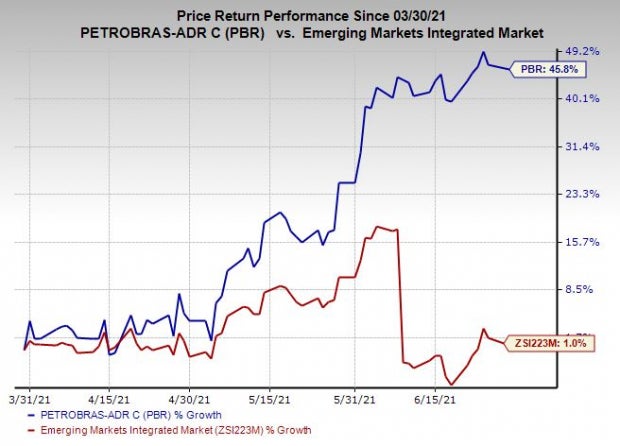 Halliburton’s 2021 earnings are expected to rise 47.7% year over year.