Tetra Tech, Inc. (TTEK - Free Report) recently secured a five-year contract worth $37 million from the United States Agency for International Development (“USAID”). The company will be responsible for supporting the socioeconomic empowerment of girls and women in Colombia.

Per the single-award deal, Tetra Tech will work in cooperation with the public and private sectors for promoting the empowerment of girls and women in the South American country. The project aims at attaining equity and generating economic opportunities for women along with reducing violence based on gender, transforming gender norms and execution of gender-based policies and services. Notably, the project will cover the vulnerable section of the society including Afro-Colombian, women with disabilities, indigenous, LGBTQI+ populations as well as migrants. Also, the company will work with Colombian institutions and partners to actively involve boys and men in transforming gender norms.

Notably, this contract is built on long-term collaboration between Tetra Tech and the USAID in economic and peace programs in Colombia.

Over the past several months, the company has clinched multiple government contracts that have supported its top-line performance. In April 2021, the company won a $36-million multiple-award contract from the U.S. Army Corps of Engineers for the assessment and management of flood risks.

Also, in February 2021, the company secured a five-year contract worth $38.8 million from the USAID. The single-award deal will involve the company to assist Indonesia’s government to realize its sustainable development objectives in the energy sector. In addition, in January 2021, it secured a five-year, single-award deal worth $25 million from the USAID to work on enhancing the consumption of renewable energy and reducing deforestation in Zambia. 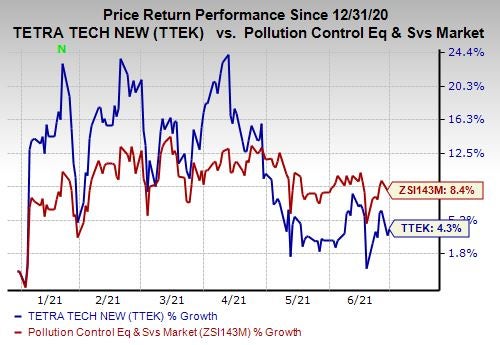 The Zacks Rank #3 (Hold) company’s shares have gained 4.3% compared with 8.4% growth recorded by the industry in the past six months.

Fuel Tech delivered an earnings surprise of 82.92%, on average, in the trailing four quarters.

Sharps Compliance delivered an earnings surprise of 306.67%, on average, in the trailing four quarters.

Reasons Why it is Worth Investing in Matador (MTDR) Stock Now