PJ Western Group is one of Papa John’s largest global franchisees in central and eastern Europe. Through this partnership, the company opened first seven Papa John’s restaurants in Magdeburg and Leipzig. Additionally, it plans to open another six stores in Halle and Merseburg by the end of summer 2021. Moreover, the company stated that it intends to open 250 new restaurants in the German market over the next seven years.

In this regard, Jack Swaysland, chief operating officer, International at Papa John’s, stated, “This expansion into Germany follows a record year of sales and growth that has positioned Papa John’s to further accelerate development in international markets. We are excited to expand our partnership with PJ Western.”

Going forward, the company plans to increase its international units, a large portion of which will be franchised. We believe that re-franchising a large chunk of its system reduces a company’s capital requirements as well as facilitates earnings per share growth and ROE expansion. Free cash flow continues to grow, which enables reinvestment for increasing brand recognition and shareholder return. 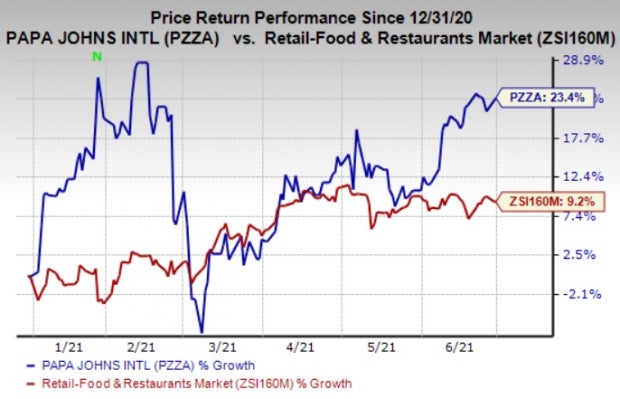 Shares of Papa John's have gained 23.4% so far this year compared with the industry’s 9.2% growth. The upside was primarily driven by the company’s optimized restaurant model, brand design enhancements and increased integration with third-party aggregators to boost its accessibility channels. This along with focus on product innovation, partnerships, international expansion and franchising initiatives bode well. Going forward, the company continues to reinforce its commitment toward providing better customer experience with enhancements to its digital ordering process. Nonetheless, earnings estimates for 2021 have moved up in the past 30 days, depicting analysts’ optimism regarding the stock’s growth potential.

Chuy's Holdings has a trailing four-quarter earnings surprise of 127.6%, on average.

2021 earnings for Dine Brands and Fiesta Restaurant are expected to surge 269.3% and 400%, respectively.

Is it Wise to Retain UDR Stock in Your Portfolio Right Now?