Lockheed Martin Corp. (LMT - Free Report) recently secured a modification contract for the production and delivery of three MH-60R aircraft, as replacement-in-kind for the U.S. Navy. The deal has been awarded by the Naval Air Systems Command, Patuxent River, MD.

Valued at $129 million, the contract is scheduled to be completed by May 2025. Majority of the work related to this deal will be executed in Owego, NY.

The MH-60R Seahawk helicopter is the world’s most advanced maritime helicopter designed to operate from frigates, destroyers, cruisers and aircraft carriers. It is equipped for a range of missions, including anti-submarine warfare, anti-surface warfare, search-and-rescue, naval gunfire support, surveillance, logistics support, personnel transfer and vertical replenishment.

Currently, it is operational and deployed with the U.S. Navy as the primary anti-submarine warfare and anti-surface weapon system for Open Ocean and littoral zones.

In recent times, the importance of military helicopters in the U.S. aerospace-defense market has increased due to advancements and integration of new tactical and logistical features along with the inclusion of improved radar systems and the availability of advanced system engineering services. Such crucial developments have been boosting the demand for combat helicopters and Lockheed Martin, being a prominent helicopter manufacturer, has been reaping the benefits in the form of a smooth inflow of contracts from both Pentagon and other U.S. allies. The latest contract win is a bright example of that.

Notably, Lockheed’s Sikorsky unit provides military and rotary-wing aircraft to all five branches of the U.S. armed forces along with military services and commercial operators in 40 nations. Hence, this unit serves as a notable revenue-generating unit for this defense contractor. Evidently, net sales from Sikorsky helicopter programs represented 9% of Lockheed’s consolidated net sales in 2020.

We believe the latest contract win will enable Sikorsky to maintain its position as a noteworthy revenue-generating unit for Lockheed in the days ahead.

The global attack helicopter market is estimated to witness CAGR of more than 4% during the 2020-2025 period, per the latest forecast made by market research firm, Mordor Intelligence. This indicates solid growth opportunities for Lockheed Martin.

Lockheed Martin’s stock has gained 3.6% in the past year compared with the industry’s rally of 19.6%. 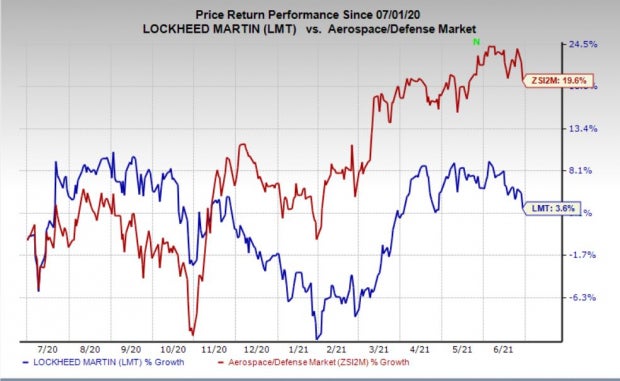