2 Tech Stocks to Buy in Q3 and Hold for Years

The S&P 500 hit new records on the final day of the second quarter. The benchmark index has climbed over 14% in the first half of 2021 and is up roughly 27% from its pre-pandemic levels in February 2020. This helps provide more context for where Wall Street is at the moment and might help ease some worries that the market is super overheated.

The Nasdaq has also soared back to new highs to end Q2, with the technology-heavy index up roughly 12% since May 12. Wall Street has used every pullback and healthy recalibration in big tech as a chance to buy their favorite stocks, from titans such as Microsoft (MSFT - Free Report) and Adobe (ADBE - Free Report) to countless growth names, at discounts.

Wall Street has driven stocks to highs amid the low volume summer in the face of inflation fears. The market has seemingly shrugged off the possibility of higher interest rates and the yield on the 10-year U.S. Treasury note has actually slipped back to 1.47% from 1.75% in late March.

The ability to look beyond rising prices amid the booming U.S. economy could mean Wall Street understands that there is no alternative investing won’t end anytime soon, with interest rates set to remain historically low even when the Fed begins to lift them. This means investors will likely be left chasing returns in equities for the foreseeable future. 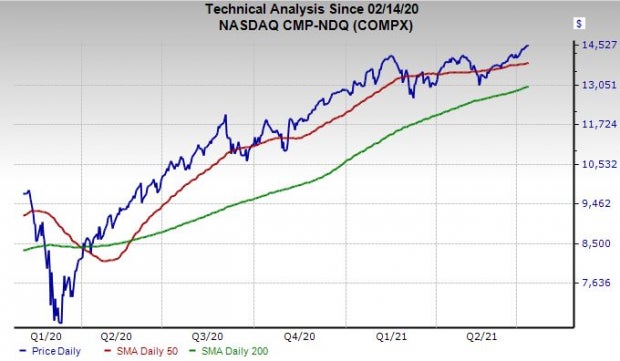 The growth is, of course, supported by the resurgent U.S. economy and the impressive S&P 500 earnings picture that is expected to keep getting better (also read: Q2 Earnings Growth Reflects More Than Easy Comps).

All that said, some investors might be hesitant to buy stocks with the market at new highs, and there are clearly valid reasons to avoid doing so. But timing the market is extremely difficult and trying to do so can lead to buying high and selling low and missing out on comebacks.

Instead, long-term investors, with horizons of a year or longer are often better suited buying strong stocks and staying constantly exposed to the market even during dips and corrections, which are healthy and common. Today we dive into two stocks poised to grow in a world dominated by technology that might be worth buying in Q3 and beyond…

The pandemic cemented streaming TV as the future of entertainment in the U.S. and beyond, after its ascendance helped Netflix (NFLX - Free Report) become one of the star stocks of the last decade. In the last several years, Apple (AAPL - Free Report) and Disney (DIS - Free Report) have stormed into the streaming market to take on NFLX, Amazon (AMZN - Free Report) , and others. Disney already crushed its own subscriber goals and laid out a lofty new path and Netflix has amassed over 200 million subscribers worldwide.

Clearly, streaming is a space Wall Street wants to cash in on and Roku is one of the only pure-play streaming stocks not named Netflix. The company rose to prominence on the back of its small devices that plug into TVs and allow users to watch streaming TV content. Roku’s tech is also built into smart TVs, and it was the No. 1 smart TV OS sold in the U.S. in 2020, with nearly 40% market share.

Roku’s hardware is strong, but it became a Wall Street standout because of its ability to sell ad space across its marketplace, taking a piece of streaming service subscription revenue, ad inventory, and more. Roku allows marketers to buy targeted ads, which is crucial since eMarketer projects digital will account for 65% of the roughly $240 billion-a-year ad industry in the U.S. by 2023, up from around one-third a few years ago. 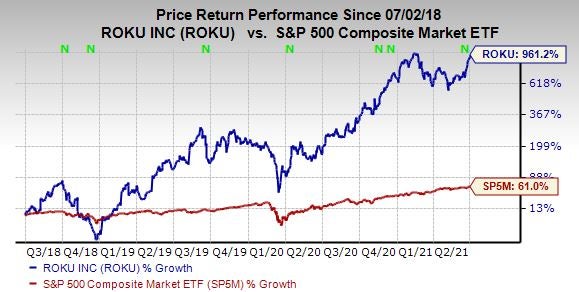 The company also has a Roku Channel that enables users to watch free, ad-supported streaming movies and TV shows. And it boosted its platform with its purchase of the streaming rights to the short-form shows the now-defunct Quibi created.

Roku topped our Q1 estimates in May, with revenue up 78%. And its +$0.54 a share adjusted earnings blew away our bottom-line estimate that called for a -$0.12 loss.The growth wasdriven by its ad-heavy platform revenue that skyrocketed 101% to account for 80% of total sales and it added 2.4 million active accounts to close at 53.6 million. Investors should know Roku’s monetized video ad impressions more than doubled YoY.

Roku currently lands a Zacks Rank #3 (Hold), alongside an “A” grade for Growth in Style Scores system. And 16 of the 20 brokerage recommendations Zacks has are “Strong Buys.” ROKU shares have surged 260% in the past year, as part of a much larger run, and it has rebounded right near its February records on the back of a 50% climb since May 12.

The resurgence has pushed the stock above overbought RSI territory of 70, which could mean it’s in for a pullback. Therefore, some investors might want to wait for a more enticing possible entry point. But Roku appears like a strong long-term tech buy that’s poised to grow no matter who wins the streaming wars, and it boasts a solid balance sheet.

Snap has continually enhanced its social media app that became famous for disappearing photos and videos. Today, Snapchat is full of video content and shows from social media stars to celebrities like Kevin Hart, as well as mega brands like the NFL, Disney, and many others.

Snapchat’s Discover page has gained traction and it’s been in the booming mobile gaming market for over two years. The company also constantly releases various augmented reality offerings and it launched its Spotlight feature late last year that aims to challenge TikTok.

Snap’s beefed-up portfolio of entertainment offerings has attracted advertisers as more people disconnect from ad-supported legacy media and simply ignore more traditional online banner ads. Investors should also know that Snap has boasted that in the U.S. it reaches “more than 90% of 13-to-24-year-olds and more than 75% of 13-to-34-year-olds.”

Snap’s ability to reach this “unduplicated and hard-to-reach audience” has attracted Wall Street’s attention, as it continues to add users and monetize its growing platform, as Facebook (FB - Free Report) and other giants face government scrutiny. Snap beat our first quarter estimates, with revenue up 66% and its daily active users up 22% to 280 million. Plus, it posted break-even earnings to top our estimate that called for a loss of -$0.06 a share.

Snap’s FY21 and FY22 earnings estimates surged since its report, with some positive revisions recently as well. Zacks estimates call for Snap’s FY21 revenue to surge 56% to reach $3.9 billion, with FY22 projected to climb another 49% to $5.8 billion. These estimates would represent its best growth as a public company and follow three-straight years of between 43% to 46% revenue expansion. 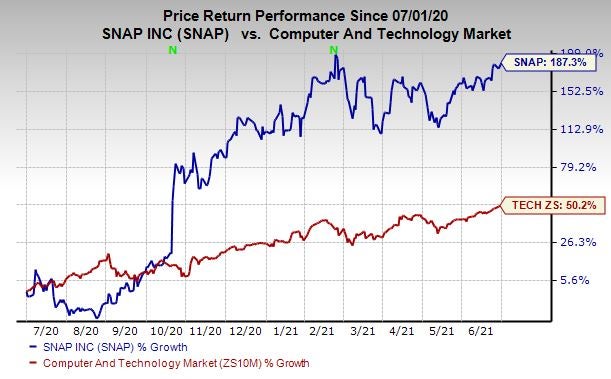 Snap lands a Zacks Rank #3 (Hold) at the moment, next to an “A” grade for Growth. Like Roku, Wall Street is high on Snap, with 20 of the 25 brokerage recommendations Zacks at “Strong Buys,” with none below a “Hold.”

SNAP has climbed 190% in the past year, but it fell victim to the growth selling that began in February. Luckily, it has mounted a big comeback, up over 30% since mid-May.

The stock closed regular hours Wednesday just off its records at around $68 a share. Despite trading near its records, its trades well below its year-long highs of 27X forward sales at 21.3X. And it still rests below overbought RSI levels at 65.

Clearly, there could be more selling pressure with the Nasdaq at fresh highs. And some might want to wait for Snap to report its Q2 earnings. Of course, as we touched on, investors with long-term outlooks might want to buy Snap now given its ability to constantly evolve its modern media platform that plays into overall smartphone addiction, while attracting a vital demographic in the new age of entertainment.