FactSet Research Systems Inc. (FDS - Free Report) reported mixed third-quarter fiscal 2021 results, with earnings missing the Zacks Consensus Estimates and revenues beating the same. There has been no impact of the disappointing earnings performance on the stock so far.

Adjusted earnings (excluding 10 cents from non-recurring items) per share of $2.72 missed the Zacks Consensus Estimate by 1.1% and declined 4.9% on a year-over-year basis, primarily due to higher operating expenses.

FactSet’s revenues of $399.6 million surpassed the Zacks Consensus Estimate marginally and increased 6.8% year over year. The uptick was driven by higher sales of analytics, content and technology solutions.

Notably, FactSet’s shares dropped 0.1% in the past year compared with 23.3% rally of the industry it belongs to. 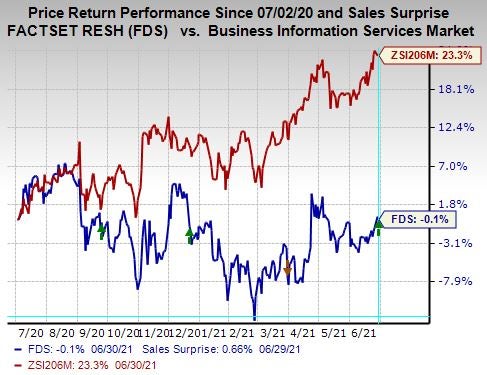 FactSet’s Annual Subscription Value (“ASV”) plus professional services was $1.6 billion, up 6.6% organically. Buy-side and sell-side ASV growth rates were 5.6% and 8%, respectively. Nearly 84% of organic ASV was generated by buy-side and the rest by sell-side firms performing functions like mergers and acquisitions-advisory work, equity research and capital-markets services.
ASV generated from the United States was $993.4 million, up 6.6% from the prior-year quarter’s levels. ASV from EMEA and Asia Pacific regions were $436.4 million and 163.4 million, up 5.9% and 8.6% year over year, respectively.

FactSet added 69 clients in the reported quarter, primarily driven by an increase in corporate and wealth management clients, taking the total to 6,172. Annual client retention was 91%. At the end of the quarter, total employee count was 10,713, up 6.4% year over year.

FactSet exited the quarter with cash and cash equivalents of $658.3 million compared with $602.7 million in the previous quarter. Long-term debt amounted to $574.5 million compared with $574 million at the end of the prior quarter. In the quarter, the company generated $140.3 million of cash from operating activities, while capital expenditures were $18.7 million. Free cash flow was $121.7 million.

The company continues to anticipate adjusted earnings per share in the range of $10.75-$11.15. The midpoint ($10.95) of the guidance is lower than the current Zacks Consensus Estimate of $11.13.

The company expects revenues between $1.57 billion and $1.585 billion. The Zacks Consensus Estimate for revenues is pegged at $1.58 billion.

Adjusted operating margin is projected in the range of 32-33%. The annual effective tax rate is expected between 15% and 16.5%.

Accenture (ACN - Free Report) reported solid third-quarter fiscal 2021 results, with earnings and revenues surpassing the Zacks Consensus Estimate. Earnings of $2.40 per share beat the consensus estimate by 7.6% and improved 26.3% year over year. Revenues of $13.26 billion beat the consensus mark by 3.6% and increased 21% year over year on a reported basis and 16% in terms of local currency.

ABM Industries’ (ABM - Free Report) reported mixed second-quarter fiscal 2021 results, with earnings beating the Zacks Consensus Estimate and revenues missing the same. Adjusted earnings from continuing operations came in at 82 cents per share, beating the consensus mark by 9.3% and rising 36.7% year over year. Total revenues of $1.49 billion missed the consensus estimate by 0.3% but moved up 0.1% from the year-ago quarter’s figure.

IHS Markit Ltd. (INFO - Free Report) reported impressive second-quarter fiscal 2021 results, with earnings and revenues beating the Zacks Consensus Estimate. Adjusted earnings (excluding 41 cents from non-recurring items) per share of 81 cents beat the consensus mark by 1.3% and increased 17.4% on a year-over-year basis. Total revenues came in at $1.2 billion, surpassing the consensus mark by 3.8% and increasing 15% from the year-ago quarter’s levels on a reported basis and 13% organically.