HC2 Holdings, Inc. yesterday announced that it completed the divestment of its insurance segment to Continental General Holdings LLC. The divestment has been valued at $90 million.

Notably, the divestment deal was signed by HC2 Holdings on May 29. It is worth noting here that shares of the company increased 1.51% yesterday, ending the trading session at $4.04.

The divestment value of $90 million comprised of a cash portion of $65 million as well as securities. Also, the transaction value includes certain assets. Notably, HC2 Holdings intends on using the divestment proceeds to fund its general corporate purposes.

HC2 Holdings noted that the divestment is in sync with its plans to strengthen its capital structure, growth opportunities and focus on key businesses, including spectrum, life sciences and infrastructure.

Other Divestment Actions by HC2 Holdings in 2021

In January 2021, HC2 Holdings completed the divestment of its clean energy subsidiary Beyond6, Inc. to Mercuria Investments US, Inc. The divestment was valued at $169 million.

HC2 Holdings is focused on strengthening its insurance, spectrum and life sciences businesses in the quarters ahead. This along with a healthy balance sheet, lower corporate expenses and focus on enhancing growth opportunities will likely be beneficial. However, the pandemic-related woes are concerning for the company.

In the past three months, the company’s shares have declined 0.2% compared with the industry’s growth of 6.6%. 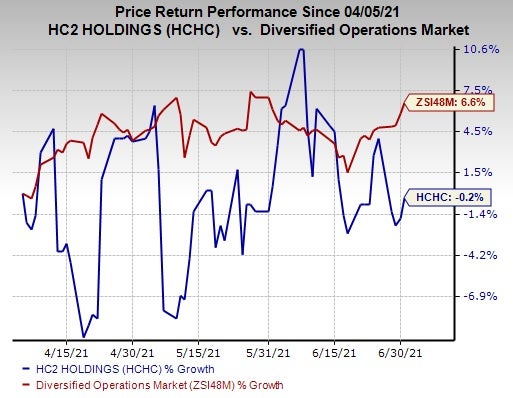 Notably, Crane entered a deal with Grupo Verzatec S.A. de C.V., for the divestment of its Engineered Materials segment in May 2021. The transaction’s completion is subject to the fulfillment of regulatory approvals.

Carlisle, in May, agreed to divest its Carlisle Brake & Friction segment to Waukesha, WI-based CentroMotion. The transaction, which is part of its portfolio enhancement strategy, is expected to be completed in third-quarter 2021.