It was a low-key week for the biotech sector with very few pipeline and regulatory updates. Collaboration news also took the centerstage.

Alector Gains on Glaxo Deal: Shares of Alector, Inc. (ALEC - Free Report) surged after it announced a strategic global collaboration with GlaxoSmithKline plc (GSK - Free Report) . The companies will co-develop progranulin (PGRN)-elevating monoclonal antibodies, AL001 and AL101, for a range of neurodegenerative diseases, including frontotemporal dementia, amyotrophic lateral sclerosis, Parkinson’s disease and Alzheimer’s disease. Enrollment is currently underway for a phase III study on AL001 in people at risk for or with frontotemporal dementia due to a progranulin gene mutation (FTD-GRN). Per the terms, Alector will receive $700 million in upfront payments. In addition, it will be eligible to receive up to an additional $1.5 billion in clinical development, regulatory and commercial launch-related milestone payments.

CureVac Down on Vaccine Study News: Shares of clinical-stage biopharmaceutical company, CureVac N.V. (CVAC - Free Report) , were down on the final analysis of the HERALD study on its first-generation COVID-19 vaccine candidate, CVnCoV. The sequencing of virus variants was performed on 588 COVID-19 cases to identify virus strains within the trial. Among these, 204 fulfilled adjudication criteria and were included in the efficacy analysis. In the study, 15 COVID-19 variant strains were present for efficacy analysis and the original strain was almost completely absent. CVnCoV demonstrated an overall vaccine efficacy of only 48% against COVID-19 disease of any severity, including single non-respiratory mild symptoms, which didn’t impress investors. The vaccine generated significant protection among participants in the age group of 18 to 60, with an efficacy of 53% against the disease of any severity and across all 15 identified strains.

Spero Surges on Pfizer Investment: Shares of Spero Therapeutics, Inc. (SPRO - Free Report) surged after it announced that pharma giant Pfizer (PFE - Free Report) has made a $40-million equity investment in the former. The companies have entered a licensing agreement for SPR206, Spero’s intravenously (IV)-administered next-generation polymyxin product candidate being developed to treat serious multi-drug resistant (MDR) Gram-negative infections in the hospital setting. In exchange, the company has granted Pfizer rights to develop, manufacture and commercialize SPR206 in ex-U.S. and ex-Asia territories in exchange for potential development and commercial milestone payments and royalties. Spero intends to use the proceeds from the equity investment to prepare for the potential approval and launch of tebipenem HBr and to support the continued clinical development of SPR720 and SPR206.

Kintara Surges on Study Results: Shares of Kintara Therapeutics, Inc. gained after it announced top-line data results from the recurrent arm of its open-label, phase II study of its lead compound, VAL-083, being conducted at the MD Anderson Cancer Center (MD Anderson) in Houston, TX. The study is a two-arm, biomarker-driven trial testing VAL-083 in glioblastoma multiforme (GBM) patients who have an unmethylated promoter of the methylguanine DNA-methyltransferase (MGMT) gene. The recurrent arm of the study addressed patients who have been pre-treated with temozolomide prior to disease recurrence. The data showed a median overall survival (mOS) of 8 months for the 48 efficacy evaluable patients initially receiving the treatment dose of 30 mg/m2/day. The results were encouraging as lomustine, which is the most commonly used chemotherapy for these patients, has demonstrated mOS of 7.2 months.

The Nasdaq Biotechnology Index lost 0.44% in the last four trading sessions. Among the biotech giants, Regeneron gained 6.64% during the period. Over the past six months, shares of Biogen have surged 39.21%. (See the last biotech stock roundup here: Biotech Stock Roundup: NTLA Surges on Study Data, EXEL & ALT Down on Updates & More) . 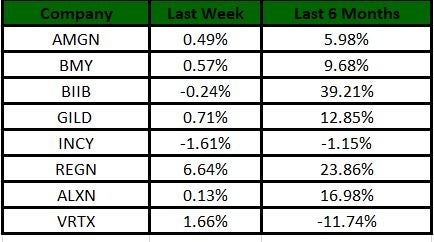