The market pulled back from its highs Thursday, as Wall Street takes a breather and a chance to grab some profits after running all three major indexes to records ahead of the 4th of July. Investors re-entered tech stocks back in mid-May, as the Nasdaq and market-movers from Apple (AAPL - Free Report) to Adobe ADBE reached attractive entry points.

The Nasdaq’s recovery, which followed an inflation fear-based selloff, has coincided with falling bond yields. The market appears to have pulled back on worries about the U.S. economy overheating, with the yield on the 10-year U.S. Treasury down from 1.75% in late March to 1.29% on Thursday. Meanwhile, the 30-year yield fell from 2.45% to 1.94%.

Lower yields make tech look even more attractive. And it’s worth stressing that TINA investing likely won’t end anytime soon because interest rates are poised to remain historically low even when the Fed starts to raise its core rate.

Wall Street is set to chase returns in equities for the foreseeable future. That means investors should consider buying strong, dividend paying stocks with Treasury-topping yields to bolster their portfolios. Today, we highlighted three stocks from different areas of the economy with solid yields and long-term growth prospects… 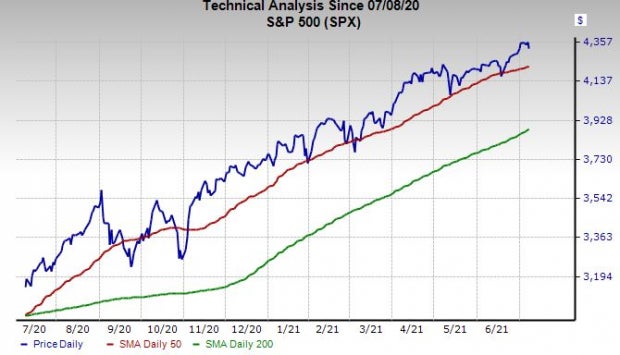 CMI and other more niche green energy companies have gained traction in what has turned into a widely popular area within the renewable energy sector that could gain more steam. Cummins currently “uses fuel cell and hydrogen technologies to power a variety of applications, including transit buses, semi-trucks, delivery trucks, and passenger trains to name a few.” CMI is committed to evolving as every major automaker from Ford (F - Free Report) to Volkswagen race to catch up to Tesla TSLA in the EV space.

Cummins topped Q1 estimates in early May, with revenue up 22% against the easy-to-compare period. Management raised its fiscal 2021 guidance at the time because of “stronger demand across all markets.”

Zacks estimates call for CMI’s FY21 revenue to surge 23% to $24.4 billion to see it climb above its pre-pandemic total in FY19. Its FY22 sales are projected to jump another 5% higher, while its adjusted EPS are projected to climb 35% this year and another 14% next year.

Cummins shares have outclimbed its Zacks econ sector during the past five years, up 105%. It popped 40% in the past year, even as it’s lagged the market in 2021, up 5%. The stock closed regular hours Thursday about 14% below its March records at $237 a share.

The downturn has pushed CMI below some key technical levels, where it has rarely stayed for long historically. The stock trades at a 20% discount to its own year-long median and 35% against its highs at 13.7X forward 12-month earnings, which also comes under its sector’s 21.5X average.

Cummins positive earnings revisions help it land a Zacks Rank #1 (Strong Buy) at the moment and it beat our adjusted EPS estimates by an average of 54% in the trailing four periods. The stock’s 2.3% dividend yield tops the 10-year and 30-year U.S. Treasury and its industry’s 0.72% average. And investors should know CMI executives plan to return 75% of operating cash to shareholders in the form of dividends and share repurchases in 2021, up from last year’s 52%.

Rent-A-Center is a lease-to-own retailer that sells furniture, appliances, TVs, and more. RCII’s sales popped over 5% in 2020, driven by stronger growth in the second half.

The Plano, Texas-based firm in February closed its purchase of Acima Holdings to boost its e-commerce abilities as the lease-to-own space proliferates in the digital shopping age for everything from electronics to shoes. Wall Street celebrated the move, sending the stock to records.

RCII then topped our Q1 estimates in May, with Rent-A-Center’s same store sales up 23% and e-commerce revenue up 50%. The company also raised its guidance amid the booming U.S. economy that has consumers ready to keep making larger purchases.

Zacks estimates call for RCII’s revenue to soar 60% to reach $4.51 billion in FY21 and climb another 14% in FY22 to $5.13 billion. Both estimates represent its strongest top-line expansion in almost 15 years, driven in part, by its Acima acquisition.

Its adjusted earnings are projected to climb by 59% and 15%, respectively. And RCII’s EPS estimates have climbed since its last release. RCII grabs a Zacks Rank #3 (Hold) at the moment and five of the seven brokerage recommendations we have are “Strong Buys,” with none below a “Hold.” Wall Street is rather high on the stock that also sports a 2.4% dividend yield to crush both the 10-year and 30-year U.S. Treasury yields, as well as Walmart’s (WMT - Free Report) 1.6%.

The payout is more impressive given RCII shares have soared 250% in the last three years to easily outpace the market, its industry, and even Target (TGT - Free Report) . The stock is up 100% in the past 12 months and a recent pullback could set up a better buying opportunity.

RCII’s $52 a share marks a 20% discount to its early June highs and it’s closing in on oversold RSI levels (30) at around 35. RCII is also trading at a 40% discount to its own year-long highs at 8.6X forward 12-months earnings, which also comes in below its industry’s average.

The pandemic crushed a key portion of Coca-Cola’s business for a significant stretch of the past 16 months. Luckily, KO’s sales trended in the right direction in the second half of 2020 and it topped our Q1 FY21 estimates. Most importantly, executives said March volumes returned to pre-pandemic levels. Despite the setbacks, the pandemic actually pushed KO to ramp up its restructuring efforts, which includes reducing its workforce, cutting underperforming brands, and more.

The beverage powerhouse has spent the last several years revamping its business to adapt to changing consumer habits. These efforts include the purchase of potential Starbucks (SBUX - Free Report) rival Costa Coffee, investments in Gatorade challenger BodyArmor—which it might take control of—and more. KO even launched an alcoholic version of Topo Chico sparkling water to get in on the booming hard seltzer market and compete against Boston Beer SAM and others.

Perhaps most importantly, away-from-home venues such as restaurants, movie theaters, and stadiums have mounted massive comebacks as the grand U.S. reopening continues. Zacks estimates call for KO’s fiscal 2021 revenue to jump 12.5% to over $37 billion, with FY22 set to come in another 6.2% higher at $39.5 billion.

These projections would see KO nearly hit pre-covid levels in FY21 and easily jump above FY19 next year. Meanwhile, its adjusted earnings are expected to climb by 12% and 7%, respectively. 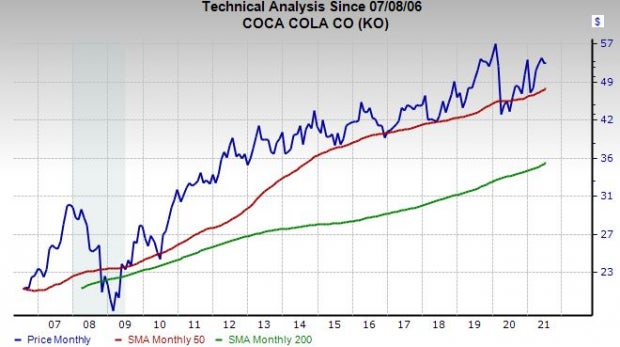 Like RCII, KO lands a Ranks Rank #3 (Hold) at the moment, but its overall earnings estimates have trended higher and it has consistently topped our bottom-lime projections. Plus, eight of the 14 brokerage recommendations Zacks has are “Strong Buys,” with none lower than a “Hold.” Even with changing habits, Coca-Cola and its more diverse portfolio will remain a staple in the U.S. and around the world.

KO remains one of the world’s most valuable brands according to Forbes, ahead of Disney (DIS - Free Report) , McDonald’s (MCD - Free Report) , Nike (NKE - Free Report) , and behind only the tech behemoths. And its 3.1% dividend yield comes above PepsiCo’s (PEP - Free Report) 2.9%, Keurig Dr Pepper’s KDP 2.2%, and the S&P 500’s 1.3%. The stock also trades below its own year-long median and at a discount to its industry at 24X forward 12-month earnings.

Coca-Cola shares have climbed about 20% in the past 12 months to nearly match its industry and top PEP’s 11%. At $54 a share, KO trades below its 52-week highs and still has roughly 10% more room to run before it returns to its pre-pandemic levels. The stock also rests below neutral RSI levels and the nearby chart showcases that KO could be a solid longer-term hold.