Stocks rebounded Friday after all three major U.S. indexes pulled back Thursday amid continued exuberance that’s pushed the market to records to start the third quarter. Wall Street has climbed back into technology and other growth stocks since mid-May when many names entered attractive buying points.

Bullish investors have proven their willingness to buy up big Nasdaq players nearly every time there’s a significant and healthy recalibration since the initial post-covid surge. The technology and growth resurgence coincides with falling bond yields.

Wall Street has somewhat pumped the breaks on overheating nerves for the moment, sending the 10-year U.S. Treasury down from 1.75% in late March to around 1.30%, while the 30-year yield slipped to 1.94% from 2.45%. That said, there are some more technical trading reasons for the recent drop in yields as well.

Even before Treasury yields retreated again, many investors understood that the market would be left chasing returns in stocks given yields are poised to remain historically low even when the Fed finally starts to lift them. Investors also celebrated the June jobs report that showed continued signs of recovery but didn’t signal massive overheating.

Clearly Wall Street will remain vigilant about the impact of rising prices. But the market has decided to remain bullish during the low volume summer months, looking to the improving and reopened U.S. economy and the strong earnings picture for reassurance.

Given this backdrop, here are two ‘Strong Buy’ stocks investors might want to add to their portfolios that don’t appear overheated and are poised to benefit from continued U.S. consumer spending… 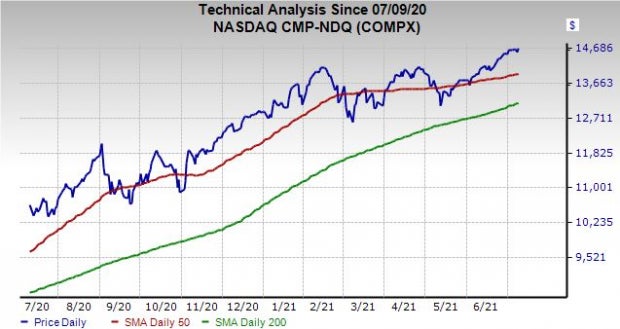 Tempur Sealy is one of the world's largest mattress and bedding companies, operating under Tempur, Tempur-Pedic, Sealy, and the Stearns & Foster brands. TPX sells higher-end mattresses, pillows, and more, offerings everything from adjustable beds and cooling mattresses to high-tech beds that aim to help reduce snoring. Overall, the company sells products that aren’t going out of style and many consumers are willing to pay a premium for better sleep.

TPX, like all retailers, has invested in its digital and direct-to-consumer business in the Amazon (AMZN - Free Report) age to fight against any encroachment from digital-focused newcomers and bed-in-a-box firms like Casper (CSPR - Free Report) . Tempur Sealy also owns its own stores and works with third-party retailers such as Mattress Firm, Big Lots (BIG - Free Report) , and others. TPX’s 2020 revenue jumped over 18% to reach $3.7 billion and top FY19’s 15% expansion.

Tempur Sealy benefitted from increased pandemic related spending, but its sales also soared 30% in Q4 FY19, well before covid. More importantly, the company is poised to benefit from the booming housing market that’s finally being driven by millennials. TPX and other retailers are set to grow as confident American consumers continue to spend, with many high-income earners sitting on more savings.

The firm topped our Q1 estimates, with revenue up 27% and direct channel sales 62% higher. Zacks estimates now call for TPX’s FY21 sales to climb 27% from $3.7 billion to $4.7 billion, with FY22 projected to jump another 8% higher. Meanwhile, its adjusted EPS are expected to soar 48% and 14%, respectively during this stretch.

Tempur Sealy’s strong earnings revisions help it grab a Zacks Rank #1 (Strong Buy) at the moment. The firm has also crushed our bottom-line estimates recently and six of the nine brokerage recommendations Zacks has are “Strong Buys,” with none under a “Hold.” Tempur Sealy also pays a quarterly dividend, with a 0.70% yield right now. Plus, TPX upped its stock buyback program.

TPX shares have soared 120% in the last year to outclimb its highly-ranked Retail-Home Furnishings Market that includes RH (RH - Free Report) and Ethan Allen . This is part of 240% run in the last three years to nearly double its peers. The stock popped again Friday to close a few dollars below its early-July records at around $40 a share.

Despite its consistent outperformance, TPX trades at 12.9X forward 12-month earnings, which represents a discount to industry’s 16.8X average, its own year-long median, and a 33% discount to its highs over this period. Tempur Sealy also sits near neutral RSI levels (50) at the moment even though its stock price has soared 50% in 2021 to crush the market.

Chewy is an e-commerce pet store that went public in 2019 and has expanded rapidly as consumers gravitate toward convenience. The firm sells pet food, supplies, treats, medications, and more for a variety of animals. Chewy has found success by adding loyal pet owners to its ranks, with 70% of sales coming from its Autoship business that allows people to have food and more delivered at regular intervals.

Chewy added 43% more users in 2020 to close the year with 19.2 million and its Autoship unit creates consistent revenue. The company, which has been at it for a decade, has expanded its offering. CHWY last October launched a telehealth service called Connect with a Vet that it's bolstered ever since. The company also boosted its pharmacy offerings. CHWY’s expanded portfolio helps it thrive in the e-commerce world dominated by Amazon, Target (TGT - Free Report) , and Walmart (WMT - Free Report) .

The company topped our Q1 estimates in early June, with revenue and new active customers both up 32%. Chewy closed the quarter with 19.8 million active customers, up 600K sequentially. “Further, retention rates remained steady as the 2020 cohort matures into their second year on our platform. Taking a broader view, over the past two years, we have increased our active customer base by 8.4 million or 75%,” CEO Sumit Singh said on the company’s earnings call. 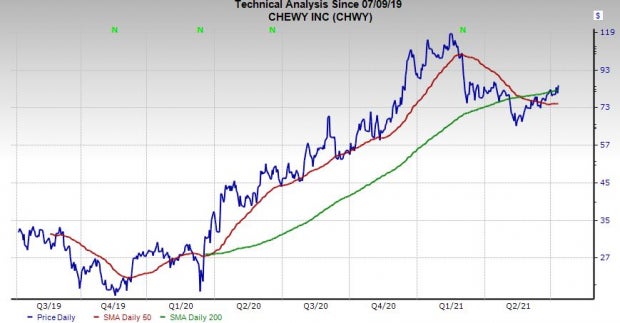 Chewy reported its first quarterly profit in Q4, crushing our bottom-line estimates. The company then followed up with another period of positive adjusted earnings in Q1. And Zacks estimates call for its FY21 EPS to climb 11%, with FY22 set to skyrocket 210% to $0.31 a share. CHWY’s FY21 and FY22 consensus earnings estimates have popped since its release to help it grab a Zacks Rank #1 (Strong Buy).

On top of that, nine of the 14 brokerage recommendations Zacks has are “Strong Buys.” More importantly, e-commerce was booming long before the pandemic and people utilizing delivery, especially automated delivery for essentials like pet food are unlikely to go back even as they return to their normal lives.

Chewy shares had soared over 300% from their March 2020 lows to their February highs of around $120 a share. CHWY then got hit hard as Wall Street sold high-flyers. Luckily, it’s up 30% since mid-May after it dipped into oversold RSI territory (30), and the nearby chart shows it recently broke above key technical levels.

CHWY still sits below overbought RSI levels and despite jumping another 5% Friday it trades nearly 30% below its records. And it trades right near its year-long median at 3.3X forward sales. All of this could give Chewy plenty of runway.