For investors’ note, the AntagoNAT technology is an oligonucleotide (a compound comprised of about three to twenty nucleotides, which form the basic structural unit of nucleic acids such as DNA) platform developed under OPKO CURNA.

The latest worldwide agreement is expected to significantly strengthen OPKO Health’s foothold in the global Oligonucleotide Therapeutics business, which is a part of the company’s broader Pharmaceutical arm.

Insight Into the Deal

Per the terms of the agreement, OPKO Health will receive an upfront payment and shares of CAMP4. It will be eligible to receive up to $93.5 million and additional shares on achieving certain development and sales targets for products developed from this technology and associated intellectual property. The company will also receive double-digit royalties on product sales from CAMP4.

Per management, the licensing agreement is expected to advance the development and commercialization of potential disease-modifying therapeutics. OPKO Health believes that CAMP4’s focus on therapeutics that restore healthy gene expression will aid in accelerating its Dravet syndrome compound via the required patient trials.

CAMP4 has prioritized OPKO Health’s AntagoNAT compound to progress into clinical trials for the treatment of Dravet syndrome. Per the Epilepsy Foundation, the syndrome is a rare drug-resistant epilepsy that begins in the first year of life in an otherwise healthy infant.

Per a report by Research and Markets, the global oligonucleotide therapy market is expected to grow from $0.98 billion in 2021 and reach $1.62 billion in 2025 at a CAGR of 13%. Factors like growing incidence of cancer and the necessity for personalized medicines for neurodegenerative disorders are likely to boost the market.

Given the market potential, the signing of the agreement seems to have been timed well.

Of late, OPKO Health has witnessed a few notable developments across its businesses.

The company, in June, announced that its subsidiary, EirGen Pharma, Ltd., has entered into an agreement with Nicoya Macau Limited, an affiliate of Nicoya Therapeutics (Nicoya). The deal is aimed at the development and commercialization of RAYALDEE in Greater China (mainland China, Hong Kong, Macau and Taiwan) for the treatment of secondary hyperparathyroidism in patients with stage 3 or 4 chronic kidney disease.

The same month, OPKO Health announced that its subsidiary, EirGen Pharma, has inked a definitive agreement with Horizon Therapeutics Public Limited Company (HZNP - Free Report) to sell one of its facilities in Waterford, Ireland to the latter.

In May, the company announced a transfer of the licensed rights to RAYALDEE in Japan from Japan Tobacco Inc. to Vifor Fresenius Medical Care Renal Pharma. 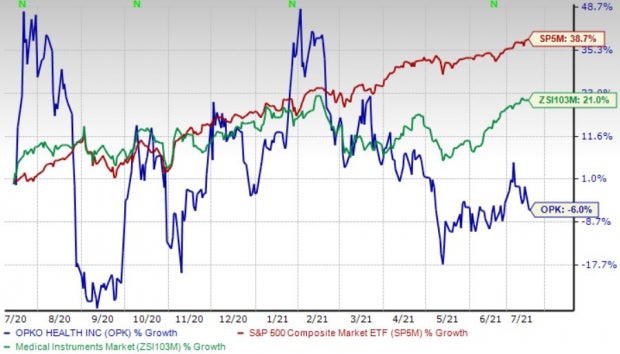