BAE Systems PLC (BAESY - Free Report) recently clinched a $72.5-million contract for the production and delivery of M109A7 and M992A3 vehicles. Work related to the deal will be performed in York, PA, and is scheduled to be completed by Dec 31, 2024. The contract has been awarded by the U.S. Army Contracting Command, Detroit Arsenal, MI.

The M109A7 vehicle is the latest howitzer in the BAE Systems M109 family of vehicles, the primary indirect fire support system for the U.S. Armored Brigade Combat Teams (ABCTs). The M109A7 is supported by the Army as a vital technology enhancement program to maintain the combat capability of its ABCTs. Both M109A7 and M992A3 programs of the company enhance the reliability, maintainability, performance, responsiveness and lethality of the combat-proven M109A6 Paladin Self-Propelled Howitzer and M992A2 Field Artillery Ammunition Support Vehicle’s (FAASV).

The U.S. fiscal 2022 defense budget proposal provisioned $12.3 billion for investments in Combat Effective Ground Forces, which includes combat vehicles. This should enable BAE Systems to clinch more contracts like the latest one, related to other combat vehicles and associated services, considering its proven expertise in varied artillery systems.

With widespread geopolitical tensions around the globe, most nations are strengthening their arsenals and taking initiatives to upgrade land-combat military vehicles. Considering the favorable geopolitical background, the growth prospects for the combat vehicle market remain impressive, on a global scale.

Interestingly, per a report by the Markets and Markets research firm, the global armored vehicles market is projected to grow from $11.6 billion in 2020 to $5.4 billion by 2025, at a CAGR of 5.8%. Such growth anticipations can be attributed to the rising incidences of armed conflicts among nations, sporadic spread of terrorism and increasing defense budgets, particularly in the Asia-Pacific and Middle East regions. Such projections are likely to benefit prominent combat vehicle makers, such as Northrop Grumman (NOC - Free Report) , General Dynamics (GD - Free Report) and Lockheed Martin (LMT - Free Report) , alongside BAE Systems, going ahead.

BAE Systems, a Zacks Rank #3 (Hold) stock, has gained 10.7% in the year to date priod compared with the industry’s growth of 9.3%. You can see the complete list of today’s Zacks #1 Rank (Strong Buy) stocks here. 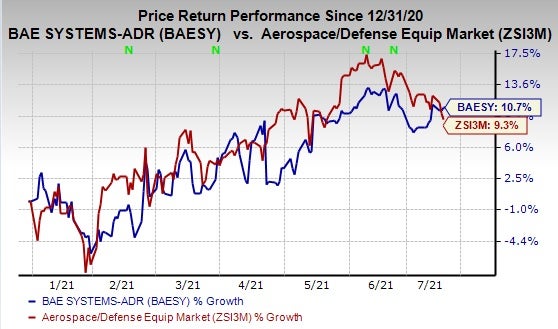