Reasons to Add Veeva Systems (VEEV) Stock to Your Portfolio

Veeva Systems Inc. (VEEV - Free Report) has been gaining from its robust product adoption. A solid performance in the first quarter of fiscal 2022 and a slew of partnerships buoy optimism on the stock. However, foreign-exchange fluctuations and a tough competitive landscape are major downsides.

The renowned provider of cloud-based software applications and data solutions for the life sciences industry has a market capitalization of $48.23 billion. The company projects 15.8% growth for the next five years and expects to witness continued improvements in its business. Veeva Systems surpassed the Zacks Consensus Estimates in all the trailing four quarters, the average surprise being 14.65%. 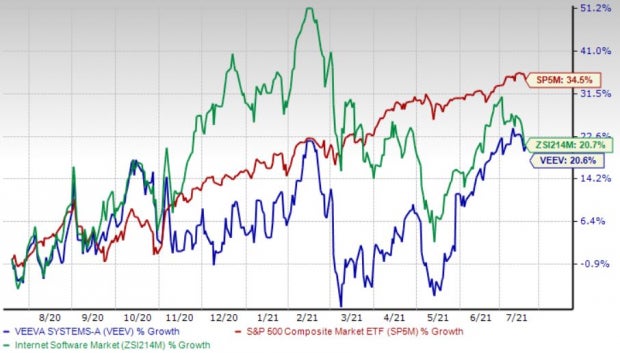 Robust Product Adoption: Veeva Systems has been registering a solid uptake for its products over the past few months. The company, in June, announced that Oval Medical Technologies Ltd and inveox GmbH are using Veeva Vault Quality Suite applications to modernize quality management and drive greater GxP compliance.

In May, Veeva Systems announced that with the growing need for greater efficiency in clinical studies, more than 100 organizations are simplifying trial management and monitoring via the sturdy adoption of Veeva Vault CTMS (clinical trial management system).

Strategic Partnerships: Veeva Systems has forged a slew of partnerships over the past few months, raising our optimism. The company, in May, announced a strategic partnership with Oncopeptides to support the launch of the latter’s first commercial product.

In April, Veeva Systems entered into a strategic collaboration with Parexel to accelerate clinical trials through technology and process innovation. In February, the company inked a deal with Impel NeuroPharma to expedite the pre-launch preparation for Impel’s migraine treatment, INP104, which has been accepted for review by the FDA and will be marketed under the trade name TRUDHESA once approved.

Strong Q1 Results: Veeva Systems’ better-than-expected results in first-quarter fiscal 2022 instill confidence in the stock. Both segments performed impressively during the quarter. The company continues to benefit from its flagship Vault platform, which is encouraging. Strength in core CRM and the expanding market share, along with customer wins, look impressive. A slew of product launches over the past few months looks encouraging as well. Expansion of both margins bodes well. A raised guidance for the fiscal year is another major positive.

Veeva Systems’ exposure to currency movement as it rakes in a significant portion of its sales from international markets remains a headwind. With expanding operations in countries outside the United States, a chunk of its revenues and expenditures in future may be denominated in foreign currencies. Fluctuations in the value of U.S. dollar versus foreign currencies may impact its operating results when translated into U.S. dollars.

Veeva Systems operates in a highly competitive market. In new sales cycles within the company’s largest product categories, it competes with other cloud-based solutions from providers that develop applications for the life sciences industry. The company’s Commercial Cloud and Veeva Vault application suites also vie to replace client server-based legacy solutions offered by its rivals.

Veeva Systems has been witnessing an upward estimate revision trend for 2022. Over the past 90 days, the Zacks Consensus Estimate for its earnings per share has moved 8.7% north to $3.50.

The Zacks Consensus Estimate for second-quarter fiscal 2022 revenues is pegged at $451.2 million, suggesting a 27.6% rise from the year-ago reported number.