3 Cheap Stocks to Buy in Q3 for Big Upside

All three major U.S. indexes surged Tuesday, quickly rebounding from Monday’s rough session that marked the continuation of a recent pullback. The Dow and the Nasdaq both jumped 1.6% on the day, while the S&P 500 climbed 1.5% higher. The ultra-fast rebound highlights the broader bullish sentiment on Wall Street as we begin Q3.

Bond yields also slipped to start the week, with the 10-year U.S. Treasury touching its lowest levels since February. The move lower over the last few months has been driven by a combination of technical factors, including short-covering, along with lower summer supply, a return to safety globally, and more.

The Delta coronavirus variant and economic slowdown worries were blamed for the market’s decline over the past week. But Tuesday’s rebound could mean profit-taking and healthy selling caused the drop. The recent pullback might continue, with second quarter earnings season possibly used as a chance to take more profits from soaring tech stocks like Microsoft (MSFT - Free Report) .

The nearby S&P 500 chart over the last year showcases why investors with long-term outlooks should do their best to avoid attempting to time the market. The need to stay exposed to the market might make more sense given the strong earnings picture and the economic growth in a reopened U.S. (also read: Q2 Earnings Reports Confirm Economic Boom Ahead).

On top of that, bond yields are set to remain historically low even when the Fed raises rates, leaving Wall Street to keep chasing returns in the stock market. So we dive into three cheap, highly-ranked stocks trading well below their highs that offer investors plenty of upside potential in July and beyond… 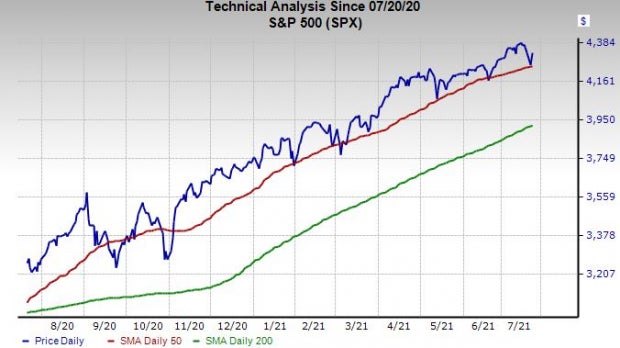 Conn’s is a specialty retailer that operates around 150 locations in states including Arizona, Colorado, Florida, Georgia, Nevada, Texas, and many others in the American South and Southwest. The company sells everything from furniture and appliances to consumer electronics such as TVs and computers.

For millions of customers the ability to make bigger purchases in installments is vital. The company is coming off a blockbuster Q1 of its FY22, with comps up over 19% and it posted its highest-ever quarterly earnings.

Conn’s also opened more showrooms last quarter, mostly in Florida and its e-commerce revenue surged 96%. The retailer is poised to bounce back from a covid-hit year as consumers continue to spend amid a strong U.S. economy, as Conn’s invests in its digital transformation and brick-and-mortar expansion.

CONN crushed our bottom-line estimates in three out of the last four quarters. Plus, its FY21 and FY22 consensus earnings estimates have surged since its early June release to help it grab a Zacks Rank #1 (Strong Buy) right now.

Conn’s also earns an overall “A” VGM score and is part of top a 11% Zacks industry. The stock has climbed 136% in the last year to more than double its highly-ranked space and is up 95% in 2021. CONN popped Tuesday to over $23 a share.

Despite the jump, it’s trading 25% below its early June highs and still has miles of room before it reaches its 2018 levels, much less its 2014 peaks of around $70. CONN also trades at 8.2X forward 12-month earnings for a huge discount to its industry’s 22.7X average and its own median over the past year. The stock also sits well below neutral RSI levels (50) at 39.

Ruth's Hospitality is one of the largest chains of fine dining steakhouses in the country, with its company-owned and franchisee-owned restaurants totalling roughly 150. The pandemic hit Ruth's Chris Steak House hard since it’s hardly a take-out spot and many of its locations were closed for some period of time last year—sales fell 40% in 2020. Luckily, nearly all of its restaurants were open and offering limited capacity dining service by the end of the first quarter.

The company blew away our Q1 EPS estimates and it’s ready to return to growth as consumers pour into restaurants ready to spend. Zacks estimates call for RUTH to post 50% revenue growth in FY21 and another 13% in FY22 to climb above its pre-pandemic levels at $472 million. It is also projected to swing from an adjusted loss of -$0.38 a share to +$1.07 a share and then expand its bottom line by another 33% in 2022.

RUTH’s earnings estimates have popped recently to help it hold its Zacks Rank #1 (Strong Buy) standing. The stock also rocks a “B” grades for Growth and Momentum in our Style Scores system.

Like CONN and much of the market, Ruth’s stock popped Tuesday and at around $20 a share it still has 25% more runway before it reaches its May highs. And it sits 35% below its 2018 levels, while marking an 80% discount to its industry at 15.1X forward earnings.

Ruth’s shares slipped below key technical levels as they pulled back from their May levels. Luckily the recent pop has put it right on the cusp of its 200-day moving average.

The stock also just broke above oversold RSI (30) levels at around 34. All of this provides plenty of room for Ruth’s to climb, especially as consumers continue returning to their normal lives.

Mattel is a historic toys and games maker with a portfolio that includes Barbie, Hot Wheels, Fisher-Price, and much more. The company is coming off a strong second-half of 2020 that saw it post back-to-back quarters of 10% sales growth. This expansion marked its strongest in years, as traditional toy and game companies struggle to adapt to the tech-heavy world of video games and smartphones.

Mattel executives said they are seeing higher-than-expected demand because people are trying to find different ways to entertain their kids and families amid growing concerns about screen time that was elevated during remote learning. MAT’s sales climbed 2% last year amid the pandemic to post its first top-line growth in six years.

MAT then destroyed our Q1 FY21 estimates, with sales up 47%. Zacks estimates project Mattel’s FY21 revenue will jump 9% to reach $4.98 billion, with FY22 projected to come in 4.6% higher. Better yet, Mattel’s adjusted earnings are projected to climb by 69% and 28%, respectively. The company has also crushed our bottom-line estimates by an average of 80% in the trailing four periods. 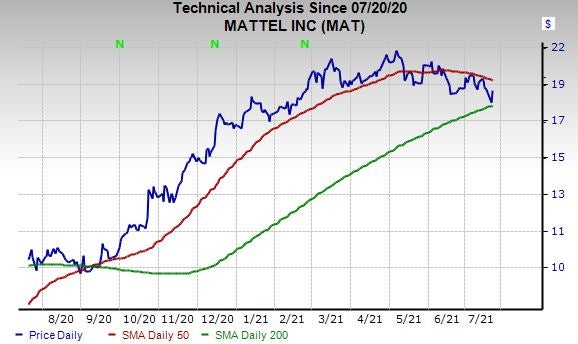 Analysts quickly raised their EPS estimates following MAT’s strong quarter. The stock has also seen some positive revisions in the last seven days as well, which means some might be expecting big things from the toy and games maker’s Q2 financial release on Tuesday, July 27.

The stock lands a Zacks Rank #2 (Buy) right now, alongside “A” grades for Growth and Momentum in our Style Score system. And eight of the 11 brokerage recommendations Zacks has for the stock are “Strong Buys,” with the other three at a “Hold.”

MAT shares have jumped 12% in 2021 and 75% in the past 12 months to blow away its highly-ranked Toys-Games-Hobbies industry that includes TakeTwo Interactive (TTWO - Free Report) and Hasbro (HAS - Free Report) . Despite its outperformance, MAT trades at a solid discount to its industry at 17.8X forward 12-month earnings vs. 24.6X.

Like its peers on this list, Mattel stock has retreated from its highs in the last several months, closing Tuesday nearly 15% below its early May levels. Perhaps more importantly, MAT trades 40% below the $33 a share it traded at in 2016 and even further under the $45 it hit in 2013. And the stock sits beneath neutral RSI (50) levels at 45.

MAT’s growth outlook suggests there could be an active push from some parents for their kids to spend less time on screens in a world where more people are addicted to devices. Mattel is also ready to roll out some movies and TV Shows. “We gained global market share and continued to transform Mattel into an IP-driven, high performing toy company,” Ynon Kreiz said in prepared remarks last year.