The Nasdaq, the S&P 500, and the Dow all popped again Thursday, marking the third-straight day of gains as stocks attempt to reclaim their records nearly as fast as they fell. Monday’s huge decline capped nearly a week of selling after all three indexes hit highs on July 12.

Corrections and selloffs are vital parts of well-functioning markets. Since the broader worries we touched on and rising prices haven’t gone away in three days, profit-taking appears to be a worthy culprit, especially considering the ultra-fast rebound.

Wall Street heavy hitters always pull some winnings off the table, only to dive back into their favorite stocks at more enticing levels. The average investor can attempt to adopt a similar approach. But one thing those with horizons extending well over a year should do is stay exposed to the market at all times, because timing the market and individual stocks is extremely difficult.

The recent fall in Treasury yields makes tech and growth names more attractive. Plus, even when the Fed eventually raises rates, Wall Street will be left chasing returns in equities for a long time given the current rock bottom levels.

With this in mind, we dive into two of the biggest names on Wall Street ahead of their upcoming financial releases to see if Apple and Microsoft might be worth buying even at new highs… 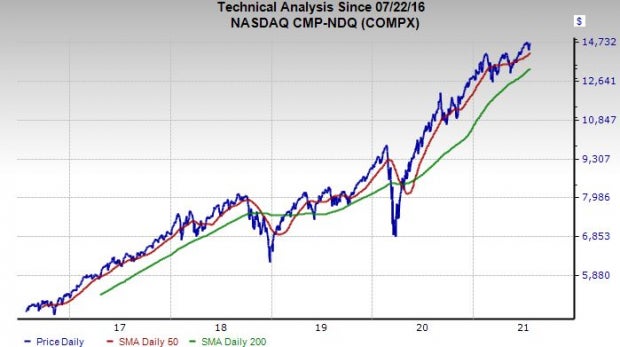 AAPL is up 20% since mid-May and is trading right near new highs of around $150 heading into its Q3 financial release. The recent run follows a period of extended stagnation for the world’s largest company (roughly $2.5 trillion market cap) following its post-stock split surge.

Apple is up only 10% since September 1 to lag the Zacks tech sector’s 25% climb and the S&P 500’s 23%. Its underperformance seemed due given its massive run following the covid crash and it’s up 180% in the last two years vs. the tech sector’s 80%.

AAPL and the broader technology gains in the past two months might give some investors pause. But those with long-term horizons shouldn’t focus too hard on finding the best entry points—save that for the traders. Apple also trades 25% below its year-long highs at 27.3X forward earnings, which comes in under its median over this stretch. And its recent pullback sent it back below overbought RSI levels. 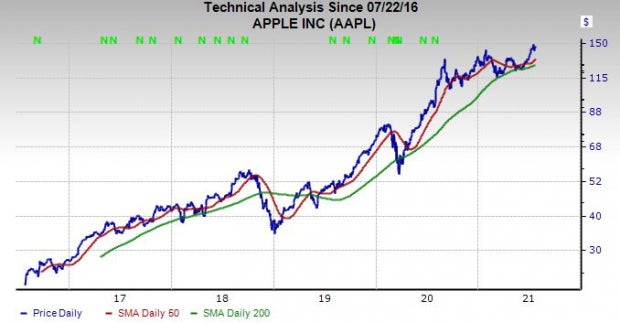 Wall Street remains high on Apple, with 18 of the 26 brokerage recommendations Zacks has at “Strong Buys,” with four more “Buys,” and none below a “Hold.” Apple also closed Q2 with $83 billion in net cash and it plans to keep buying back more stock and paying higher dividends in an attempt to “reach a net cash neutral position over time." This is fantastic news for investors and further solidifies Apple’s buy-and-hold status even if it faces near-term selling pressure.

Apple boasts a strong history of quarterly earnings beats, including a 40% in Q2. Analysts have continued to raise their EPS estimates, with some higher revisions in the past seven days. This means Apple could be due for another big beat. The bottom-line positivity helps AAPL grab a Zacks Rank #2 (Buy) at the moment, alongside its “A” grade for Momentum and “B” for Growth in our Style Scores system.

CEO Tim Cook’s mission is to transform Apple far beyond an iPhone company and continually make money from its massive and growing user base. These services efforts go beyond its App Store and include Netflix (NFLX - Free Report) and Spotify (SPOT - Free Report) competitors, a subscription news offering, a video game platform, digital workout classes, and more. AAPL ended Q2 with 660 million paid subscriptions, up 145 million from the year-ago period and “twice the number of paid subscriptions” it had “only two and a half years ago.”

Apple made news over the last year-plus and more recently for its privacy efforts that now impact Facebook (FB - Free Report) and other’s ability to track users. AAPL does face some legal battles about its own app store. But Wall Street doesn’t seem worried, especially when the demand for its first 5G capable iPhone has been strong, while iPad and Mac sales regained momentum and its smartwatch and wireless headphones perform well.

Apple sells high-end consumer electronics that millions of people crave and want the latest upgrade. The business is poised to boom in a world full of smartphone and device addicts. And its branding prowess remains nearly unmatched.

Given this backdrop, Zacks estimates call for AAPL’s FY21 revenue to climb 30% from $275 billion to $357 billion. This would come on top of last year’s 6% sales expansion and mark its strongest top-line growth since 2015. Meanwhile, its adjusted earnings are projected to soar 58% this year.

Recent reports suggest Apple is boosting iPhone production and Zacks estimates call for it to follow up 2021’s growth with higher sales and earnings next year. Investors should also note Apple has brought more of its chips in-house and there have even been reports it’s considering entering the electric vehicle market.

Microsoft, like its tech titan peer, posted blowout results last quarter as it continues to benefit from cloud computing growth, its expanding portfolio, and piles of cash that help fund its strategic acquisitions. MSFT posted 19% sales growth and 40% adjusted EPS expansion in Q3 FY21 and analysts quickly raised their outlooks for a firm that almost always beats bottom-line estimates.

Zacks estimates call for its 2021 revenue to climb 16% to $166 billion, while FY22 sales are set to pop another 11.4%. Theses projections would extend its streak of between 10% to 15% sales growth to five years, a decent run, to say the least, from a company that went public in the 1980s. Meanwhile, its adjusted earnings are projected to climb 35% and 7%, respectively during this stretch.

Microsoft’s earnings revisions have turned stagnant recently to help it land a Zacks Rank #3 (Hold) at the moment. The stock also sports “B” grades for Growth and Momentum in our Style Scores system. And Wall Street analysts love MSFT, with 18 of the 19 broker recommendations Zacks has coming in at “Strong Buys,” with the other a “Buy.”

Plus, the company finished last quarter with roughly $125 billion in cash and equivalents. The firm returned $10 billion to shareholders via stock buybacks and dividends during the period and its 0.80% yield tops AAPL’s 0.60%.

The $2.1 trillion market cap company lagged just behind the Zacks Tech Sector during the past year, up 41%. MSFT has climbed nearly 30% in 2021, hitting new highs along the way, including another record Thursday.

The stock has also outpaced Amazon (AMZN - Free Report) , Facebook, and Netflix over the past three years. The recent rip pushed MSFT above overbought RSI levels (70) at 72, which could mean some profit-taking is in the cards. Microsoft also trades at a 5% discount to its year-long highs at 33.6X forward 12-month earnings.

Investors have kept pouring into the historic technology firm over the last five years because of its ability and foresight to adapt. Its booming cloud business that creates consistent revenue has made the company more vital to its business clients. And Microsoft’s ability to expand its cloud business alongside Amazon and others transformed its outlook for years to come. Cloud now plays a role across the entire company from its Office suite to Xbox. 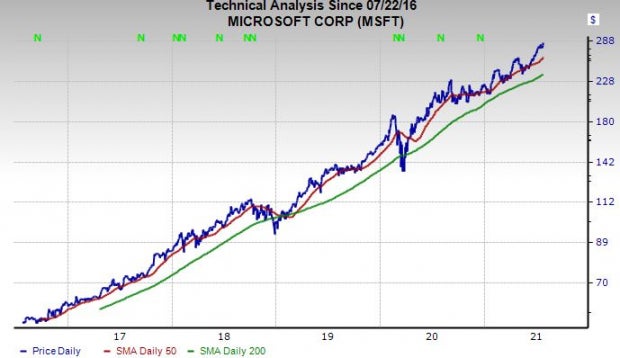 MSFT announced in mid-April its plans to buy Nuance Communications Inc. for $16 billion, making it the second-largest deal under CEO Satya Nadella. Nuance is at the forefront of speech recognition and AI, with its tech set to roll into MSFT’s growing cloud business for healthcare clients and beyond.

Microsoft is increasingly invaluable to its customers from everyday consumers to giant enterprises and it’s prepared for the hybrid work world with offerings that compete against Zoom Video (ZM - Free Report) .