The last week of July is one of the busiest stretches of the second quarter earnings season and will feature heavyweights such as Apple, Amazon, and Microsoft. Countless other less-heralded tech stocks are also set to report, including Garmin (GRMN - Free Report) .

The navigation and wearable tech company appears worth considering heading into its second quarter financial release due out on Wednesday, July 28.

From Smartwatches to Flying Taxis

Garmin might have become a household name in the U.S. and elsewhere for its in-car navigation systems. But the company is far more diverse, which is great considering many people use their smartphones to find their way around.

GRMN also sells fitness wearables and smartwatches that have grown in popularity amid competition from Apple (AAPL - Free Report) and others. Fitness was its largest top-line contributor last quarter.

Along with of more consumer electronics, the Switzerland-headquartered sells high-end fish finders, advanced radars and systems for boats and airplanes, and much more. For instance, GRMN in February landed an agreement with Joby Aviation for tech to help create “scalable air taxi services.” Garmin’s 2020 revenue climbed over 11% to reach $4.19 billion. This came on top of FY19’s 12.3% sales growth and 2018’s 7%.

The firm topped our Q1 estimates, with sales up 25% to $1.07 billion and adjusted earnings 30% higher. The growth was driven by double-digit expansion in fitness, outdoor, marine, and auto. “Interest in fitness, health, and active lifestyle products has never been higher, and we believe that we are well positioned to capitalize on the opportunities ahead,” CEO Cliff Pemble said in prepared remarks. 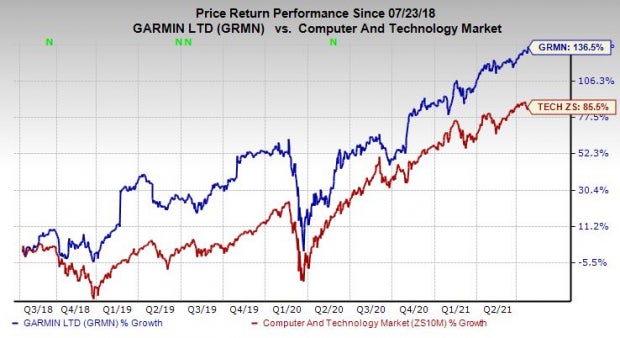 Zacks estimates call for GRMN’s fiscal 2021 sales to climb 12% to $4.68 billion, with FY22 set to pop another 8% higher. Meanwhile, its adjusted EPS figures are expected to climb by 4% and 12%, respectively over this stretch. The stock has also crushed our bottom-line estimates by an average of 64% in the trailing four periods.

Garmin’s earnings estimates have climbed since its last report and its seen some higher revisions leading up to its upcoming release. This EPS positivity helps GRMN land a Zacks Rank #2 (Buy).

GRMN shares have soared 230% in the past five years to easily outclimb the Zacks Tech Sector’s 175%. This run includes an industry and sector-topping 50% jump in the past 12 months.

Garmin closed regular hours Thursday just below its recent records at $151 a share. The stock also trades right below the tech sector at 26.7X forward 12-month earnings. And its 1.76% dividend yield easily tops the 10-year U.S. Treasury and the S&P 500’s average, a fact made more impressive given its performance.

GRMN stock is near overbought RSI levels (70) at 65 right now and it could face selling pressure along with the rest of the market if Wall Street uses earnings season as a chance to take more profits. That said, longer-term investors might want to consider Garmin as a stable, dividend-paying tech stock exposed to multiple growth industries including futuristic areas such as flying taxis.