Quarterly revenues gained 6% on a reported basis and 15% at CER to $11.3 billion (£8.09 billion), beating the Zacks Consensus Estimate of $10.55 billion. The growth was driven by recovery across all segments

Shares of Glaxo were up 1.6% in pre-market trading on Jul 29 following the announcement of second-quarter earnings. The company’s shares have gained 7.3% so far this year compared with the industry’s 11.6% increase. 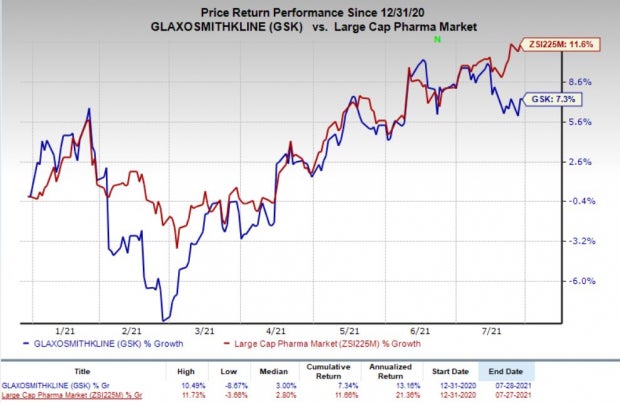 Sales in the United States were up 23%. Sales in European and International markets also gained 6% and 3%, respectively, at CER.

Respiratory sales were up 36% at CER mainly on the back of higher sales of Trelegy, and Nucala. Nucala sales were up 32% at CER during the quarter. Trelegy Ellipta sales surged 64% year over year driven by strong growth in all regions.

Sales of Anoro Ellipta increased 4% at CER while Relvar/Breo Ellipta registered gain of 40% in sales during the second quarter.

HIV sales increased 14% year over year at CER mainly due to destocking in the year-ago quarter. Sales of dolutegravir franchise were up 14% while sales from legacy drugs declined 1% at CER.

Sales of the dolutegravir franchise were up 6% at CER in the U.S. market and 12% in Europe. In International markets, sales were up 54% at CER. Please note that Glaxo markets Juluca in collaboration with J&J (JNJ - Free Report) .

Sales of immuno-inflammation drug, Benlysta rose 34% in the quarter, reflecting the impact of label expansion of the drug for treating active lupus nephritis in the United States and Japan.

Oncology sales were up 69% year over year, mainly driven by Zejula. Sales of Zejula rose 38% in the quarter.

The company recorded £16 million from sales of its COVID-19 therapy, sotrovimab, which was granted emergency use authorization in the United States in May. The company developed it in collaboration with Vir Biotechnology (VIR - Free Report) .

Sales of Pain relief and Oral health categories increased 13% and 12%, respectively, in the quarter. Sales of Vitamins, minerals and supplements category were down 6% in the second quarter. Sales of Respiratory health gained 6%. Digestive health and other category sales were up 3%.

After declining sales in the first quarter mainly due to COVID-19 vaccination prioritization, Glaxo’s total vaccine sales recovered during the second quarter on the back of meningitis vaccine and pandemic adjuvant sales. Sales from the Vaccines segment were up 49% at CER. Shingrix sales gained 1% in the reported quarter.

In Meningitis vaccines, Bexsero sales increased 63% while sales of Menveo were up 71%. Sales of influenza vaccine Fluarix more than doubled. Sales of Established vaccines were up 38% year over year.

During the quarter, Glaxo recorded sales of £260 million from its pandemic vaccines, including £258 million of pandemic adjuvant sales. The company recorded this revenue from supply of adjuvant to the U.S. and Canadian governments.

Selling, general and administration (SG&A) costs increased 5% at CER year over year to £2.5 billion. The increase in SG&A costs was led by the launch of new products in Pharmaceuticals and Vaccines segments.

The company expects normalcy to return in the second half of 2021. It anticipates full-year sales for the Pharmaceutical segment to remain flat or grow up in low-single digit percentage. Sales of Consumer Healthcare segment is expected to increase by low to mid-single digits, excluding brands divested/under review.

The company expects sales of the vaccine segment to recover in the second half of 2021.

Glaxo beat estimates for both earnings and revenues on the back of strong recovery across all segments. Loss of Advair sales due to generic competition and competitive pricing will continue to hamper revenues. However, the company’s new products in the Respiratory and Oncology segment, and two-drug HIV regimens continued to perform well in the reported quarter.