Petroleo Brasileiro S.A. or Petrobras (PBR - Free Report) announced that it produced 2.796 million barrels of oil equivalent per day in the second quarter of 2021.

The metric reflects a decline of 0.2% annually and a 1.1% increase from first-quarter 2021. The company’s crude production amounted to 2.226 million barrels per day, indicating a 0.8% year-over-year decline and a 1.4% sequential increase.

Petrobras benefited from the continued ramp-up of some major platforms, namely P-68 and P-70, which increased the production in the reported quarter. However, production was affected by maintenance stoppages in several fields in the offshore Campos Basin, and certain shallow-water and onshore properties. The company’s divestment of its Frade field also affected the output in annual terms. The net effect of these factors was responsible for the essentially flat year-over-year production in the second quarter.

In second-quarter 2021, the company witnessed strong growth in gasoline and diesel demand in Brazil. According to a recent filing, domestic diesel sales increased 11.4% sequentially in the second quarter and 28.8% year over year. Gasoline sales increased 12.7% from the first quarter and witnessed a year-over-year increase of 36.9%.

In second-quarter 2021, fuel oil sales were almost in line with the first quarter 2021 but 51.7% higher in annual terms due to higher sales for thermal generation. However, naphtha sales decreased 54.4% year over year due to the scheduled stoppage at a Braskem plant in the reported quarter.

In second-quarter 2021, the company’s LPG sales increased 3.3% year over year due to seasonal factors. Notably, jet fuel sales declined 27.1% from the previous quarter. The significant reduction reflects the negative impacts of the second wave of the coronavirus pandemic on the airline industry.

In the reported quarter, electricity generation averaged 3,297 megawatt, marking an increase of 15.1% from the prior quarter due to the worsening of hydrological conditions and the lower level of the hydroelectrical reservoirs in the country.

Net exports increased 87.9% from the previous quarter due to an increase in oil exports because of lower feedstock at refineries this quarter, scheduled stoppages at refineries and the high level of ongoing exports in the previous quarter. In terms of exports, Petrobras increased crude sales to Latin America, the United States, Europe and India in the second quarter, while sales to China decreased.

Petrobras is the largest integrated energy firm in Brazil and one of the biggest firms in Latin America. Its activities include exploration, exploitation and production of oil from reservoir wells, shale and other rocks. Further, it comprises refining, processing, trading and transportation of oil and oil products, natural gas, and other fluid hydrocarbons beside other energy-related operations.

Shares of the company have outperformed the industry in the past three months. Its stock has gained 30.5% against the industry’s 6.6% decline. 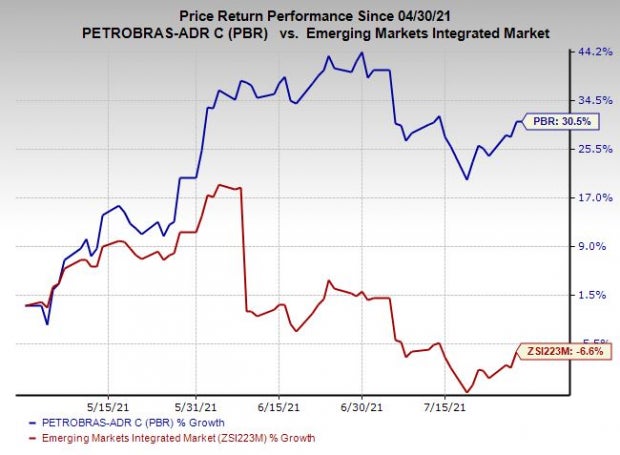 The company currently has a Zack Rank #1 (Strong Buy).