Scotts Miracle-Gro (SMG - Free Report) stock soared around 200% during a two-plus year stretch on the back of its exposure to the growing legal marijuana business in North America. The lawn care products firm has since tumbled about 30% from its early April records.

Let’s quickly dive into SMG ahead of its upcoming Q3 earnings report on August 4 to see if it might be worth buying.

Scotts Miracle-Gro is a consumer lawn and garden products powerhouse that operates under both The Company’s Scotts and Miracle-Gro brands, as well as Ortho. Wall Street has also grew enamored with its Hawthorne Gardening segment, which is a leader in the hydroponic industry. This helps Scotts Miracle-Gro gain huge exposure to the growing marijuana market.

The company’s hydroponic space helped SMG achieve strong top-line expansion over the past two years, with FY19 revenue up 19% and fiscal 2020 sales 31% higher.

Its Hawthorne segment stands to benefit for years if not decades to come as part of the broader push for marijuana legalization in the U.S. and beyond. The hydroponic industry also has legs within the broader indoor farming market that’s poised to catch on in cities and other areas where traditional outdoor agriculture is difficult or impossible.

Last quarter, Hawthorne sales surged another 66%, with its total Q2 FY21 revenue up 32%. “Consumers told us entering the season that they intended to stay engaged with lawn and garden and, so far, that is exactly what they are doing,” CEO Jim Hagedorn said in prepared remarks last quarter.

“We also continue to exceed expectations at Hawthorne as we reported our fifth consecutive quarter of sales growth in excess of 60 percent and another month of strong results in April. Given the current momentum of this business, we feel comfortable once again increasing our sales guidance for Hawthorne to a range of 30 to 40 percent growth on a fiscal year basis.”

Management did announce plans to raise prices to help offset what it called “continued commodity pressure.” On top of higher prices, the company is now coming up against some difficult to compare periods after two years of big growth. With this in mind, Zacks estimates call for its Q3 revenue to come in marginally lower vs. the prior-year quarter, with adjusted earnings set to dip 9% to $3.45 a share.

Scotts Miracle-Gro’s fiscal 2021 earnings are still projected to climb 28% on 18% higher revenue to reach $4.9 billion. At the moment, our estimates call for its FY22 revenue and earnings to slip around 3% below these elevated figures. And SMG’s earnings revisions have trended slightly in the wrong direction. 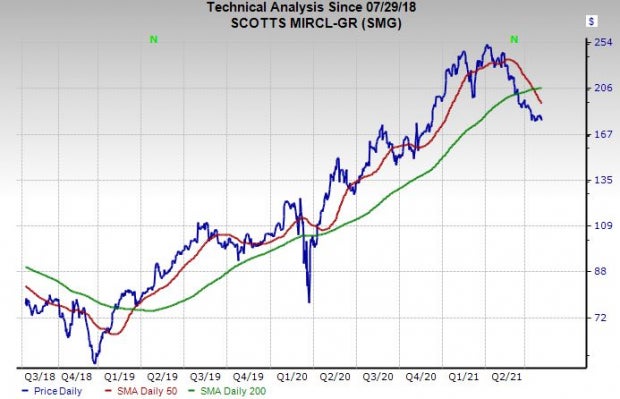 As we mentioned at the top, the stock has tumbled since it hit over $250 in early April. SMG closed regular hours Thursday down 30% from its records at $178.84 a share. The selling has pushed the stock well below both its 50-day and 200-day moving averages. The downturn has sent SMG shares near oversold RSI (30) levels at 36. The selling apears to be a major recalibration on an overheated stock.

But the company has continually raised its dividend over the years and its yield sits at 1.4%, which tops the 10-year U.S. Treasury. Plus, Wall Street still loves the stock, with six of the seven brokerage recommendations Zacks has at “Strong Buys.”

Scotts Miracle-Gro could also continue to benefit from the housing market and home improvement spending that’s finally being driven bymillennials. And, of course, its hydroponic segment stands to keep growing as more states legalize recreational marijuana. That said, some investors might want to wait for signs of a comeback before jumping in on SMG.

2 Highly-Ranked Stocks to Buy in August and Hold