Barring one-time items, adjusted earnings per share were $3.37 compared with a loss of $2.67 in the prior-year quarter. The figure trounced the Zacks Consensus Estimate of $3.16.

Revenues climbed around 140% year over year to $5,025 million in the reported quarter. It surpassed the Zacks Consensus Estimate of $4,702.9 million. The company benefited from strong steel shipments and higher prices in the quarter.

Mini Mill: The company added the segment after Jan 15, 2021 with the purchase of the remaining stake in Big River Steel. The segment recorded a profit of $284 million in the quarter. Shipments were 616,000 tons while average realized price per ton was $1,207.

U.S. Steel Europe: The segment posted profits of $207 million against a loss of $26 million in the year-ago quarter. Shipments in the segment rose around 91% year over year to 1,167,000 tons. Average realized price per ton for the unit was $905, up around 43% year over year.

Tubular:  The segment posted breakeven results against a loss of $47 million in the year-ago quarter. Shipments declined roughly 20% year over year to 105,000 tons. Average realized price per ton for the unit was $1,633, up roughly 27% year over year.

At the end of the quarter, the company had cash and cash equivalents of $1,329 million, down around 42% year over year. Long-term debt fell roughly 13% year over year to $4,803 million.

The company expects the prevailing strong market environment to continue moving ahead. It expects to set new records in the third quarter and achieve all-time best adjusted EBITDA. 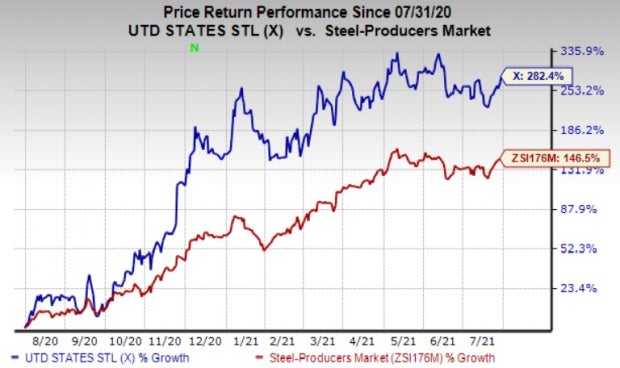 Nucor has a projected earnings growth rate of 444.9% for the current year. The company’s shares have surged around 147% in a year.

ArcelorMittal has an expected earnings growth rate of 1,484.4% for the current year. The company’s shares have shot up around 220% in the past year.

Cabot has an expected earnings growth rate of around 137.5% for the current fiscal. The company’s shares have gained roughly 51% in the past year.