Consolidated EBITDA for the quarter increased nearly fourfold year over year to $3,018 million.

The company witnessed strong consumer and industrial demand, supported by the ongoing global economic recovery. Strong demand drove price and margins across both of its Olefins and Polyolefins segments in the quarter.

In the Olefins & Polyolefins — Americas division, EBITDA increased more than sixfold year over year to $1,576 million in the reported quarter. Olefins results were driven by higher volumes and an increase in margins led by higher ethylene and propylene prices.

The Olefins & Polyolefins — Europe, Asia, International segment witnessed a nearly fourfold year over year rise in EBITDA to $708 million. Combined Polyolefins results were higher due to increased polyethylene and polypropylene price spreads over monomer led by strong demand and tight markets. Olefins results increased due to higher margins and volumes.

EBITDA in the Intermediates and Derivatives segment rose around sixfold on a year-over-year basis to $596 million. Propylene Oxide & Derivatives results rose on strong demand and tight markets. Intermediate Chemicals results also increased due to higher margins. Oxyfuels & Related Products results also went up in the quarter, driven by higher margins on higher demand and gasoline prices.

The Refining segment recorded a loss of $81 million in the reported quarter against a profit of $165 million in the year-ago quarter. The downside was partly caused by lower by-product margins and increased RIN costs.

The Technology segment’s EBITDA was $92 million in the reported quarter, down around 18% year over year. The downside was due to lower licensing revenues and catalyst margins.

In the second quarter, it generated $1.9 billion in cash from operations. The company also raised its quarterly dividend by 7.6% to $1.13 per share.

LyondellBasell also expects strong integrated polyethylene margins to continue as its customers look to address order backlogs, rebuild inventories and serve pent-up demand. It also anticipates higher mobility to drive higher demand for gasoline and jet fuel in the second half of 2021, contributing to improved margins in its Oxyfuels & Related Products and Refining businesses.

Shares of LyondellBasell have gained 60.8% in the past year compared with 36.4% rise of the industry. 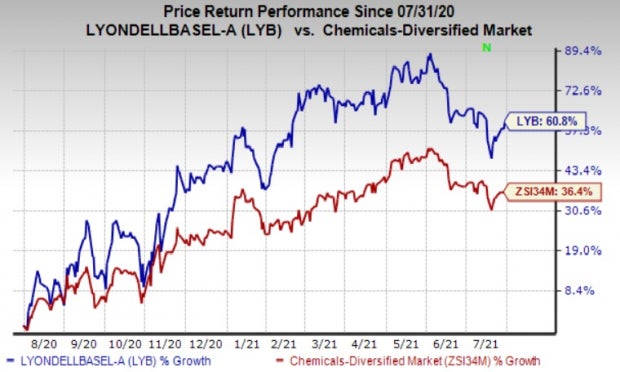 Nucor has a projected earnings growth rate of 444.9% for the current year. The company’s shares have surged around 147% in a year.

ArcelorMittal has an expected earnings growth rate of 1,484.4% for the current year. The company’s shares have shot up around 220% in the past year.

Cabot has an expected earnings growth rate of around 137.5% for the current fiscal. The company’s shares have gained roughly 51% in the past year.

Nikola (NKLA) to Report Q2 Earnings: What's in the Offing?