Huntsman Corporation (HUN - Free Report) recorded profits of $172 million or 70 cents per share in the second quarter of 2021 against a loss of $59 million or 28 cents in the year-ago quarter.

Barring one-time items, adjusted earnings per share were 86 cents in the reported quarter against a loss of 14 cents in the year-ago quarter. The figure topped the Zacks Consensus Estimate of 82 cents.

Revenues were $2,024 million, up 62.3% year over year from $1,247 million. The top line also surpassed the Zacks Consensus Estimate of $1,893.3 million. The company witnessed higher sales across all segments in the reported quarter on accelerated economic recovery, higher average selling prices, synergies arising from its recent acquisitions and certain cost optimization initiatives that it has undertaken.

Polyurethanes: Revenues for the segment rose 58% year over year to $1,155 million in the reported quarter due to higher MDI (methylene diphenyl diisocyanate) average selling prices mostly in China and Europe and higher volumes led by the ongoing market revival. However, it was partially offset by the turnaround at the company’s Rotterdam, Netherlands facility.

Advanced Materials: Revenues for the unit jumped 56% to $299 million on higher average selling prices, increased volumes and the benefits of the CVC Thermoset Specialties and Gabriel acquisitions and its recent divestiture. Sales volumes increased across all its specialty markets on the back of a global market recovery. Average selling prices increased largely due to the impact of a weaker U.S. dollar against major international currencies as well as in response to higher raw-material costs.

Textile Effects: Revenues for the division skyrocketed 103% to $207 million. The increase was due to higher sales volumes led by market recovery, especially in Asia, partly offset by reduced average selling prices.

Moving ahead, the company is focused on delivering a strong EBITDA performance and high free cash flow in the second half of 2021. It remains focused on maintaining a strong balance sheet and a balanced capital deployment.

Moreover, it is optimistic about its progress in organic capital investments, including the MDI splitter project in Geismar, LA, which is expected to commence in early 2022.

Huntsman's shares have rallied 40.3% in the past year compared with the industry’s 39.6% growth. 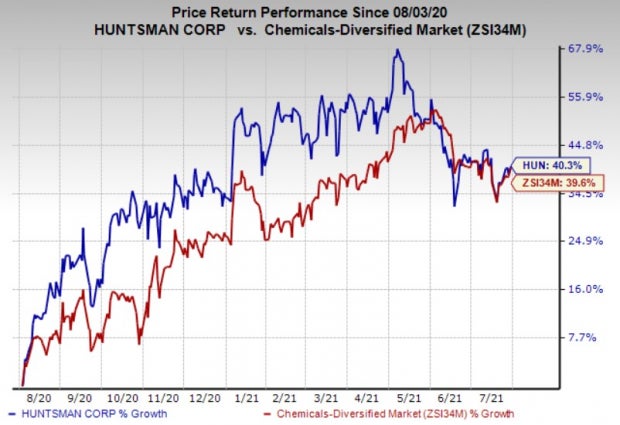 Orion has a projected earnings growth rate of 79.8% for the current year. The company’s shares have jumped 71.7% over a year.

LyondellBasell has a projected earnings growth rate of 222.6% for the current year. The company’s shares have grown 59.9% over a year.

Aperam has a projected earnings growth rate of 301.6% for the current year. The company’s shares have surged 110.3% over a year.

What to Expect Ahead of ANSYS' (ANSS) Q2 Earnings Release?