2 Top-Ranked Tech Stocks to Buy and Hold After Earnings

Wall Street largely shrugged off blowout quarterly financial results from titans of technology during the last week of July. Some pointed to “peak earnings” and the possibility of deceleration as the reason for the lackluster response. But those are largely short-sighted reasons and not true as tech dominates the market and our lives.

The Nasdaq and many big-tech tracking ETFs soared to records heading into Q2 earnings season, as investors decided it was time to revive the tech trade as cyclicals cooled off after a strong post-election/vaccine announcement run. The resurgence pushed many names into overheated territory. A quick mid-July pullback helped recalibrate stocks momentarily, but the bulls quickly pushed the market to fresh records.

These factors are likely just as much to blame for the largely tepid response to blockbuster tech earnings and strong guidance, as are Delta coronavirus variant worries and economic slowdown concerns. The largely bullish case for the market remains in place despite rising prices other fears (also read: Is Big Tech Growth Really Decelerating?).

For example, the U.S. economy expanded beyond its pre-pandemic levels in the second quarter, with GDP up 6.5%. Meanwhile, consumer confidence popped in July to the highest level in 17-months. And the earnings picture keeps getting better, with annual S&P 500 profits and revenue projected to keep climbing higher in 2022 and beyond.

Still, more selling is likely due as Wall Street takes more profits. Pullbacks and corrections are healthy parts of the market, but they do make it more difficult to time stocks. Investors with extended horizons shouldn’t focus too hard on timing the market and opt instead to buy strong stocks and stay constantly exposed, using pullbacks to add to their strongest positions.

Let’s also remember two things: tech impacts nearly every aspect of the global economy and Wall Street will likely be left chasing returns in equities even when the Fed starts to raise rates. The 10-year U.S. Treasury yield sits at 1.17% at the moment and it’s stayed below 3% for most of the past decade.

With this in mind, here are two top-ranked technology stocks that recently reported strong quarterly earnings results investors might want to consider buying to hold for a long time… 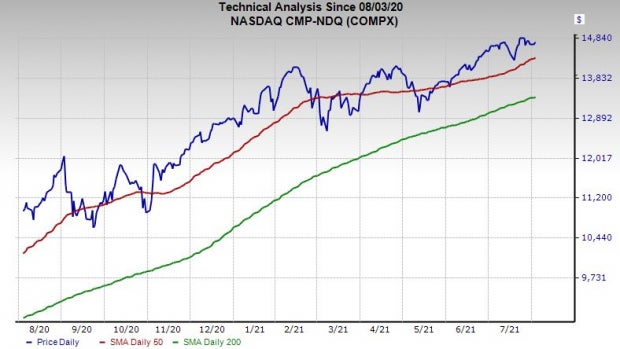 Garmin’s in-car navigation technology helped make it a household name with many consumers in the U.S. and beyond. The Switzerland-headquartered firm still sells an array of retail navigation systems and its fitness wearables and smartwatches have grown in popularity within a growth market that includes Apple (AAPL - Free Report) . Its constantly evolving product portfolio and compelling features and price points help make fitness its largest top-line contributor.

Along with its more retail-focused products, Garmin sells high-end fish finders, advanced radars and systems for boats and airplanes, and other technology and navigation equipment. For instance, Garmin in February landed an agreement with Joby Aviation for tech to help create “scalable air taxi services.” GRMN has posted five straight years of revenue growth, including 11% top-line expansion last year and a 12% pop in FY19.

The navigation and wearable tech company carried over its momentum in 2021 and it crushed our Q2 estimates on July 28, with revenue up 53% and adjusted EPS 85% higher. All of Garmin’s divisions posted 40% or higher growth last quarter. Its Auto unit posted the largest gain, up 74%, while Marine climbed 66%. And Fitness climbed 40% to account for 31% of revenue.

GRMN has now crushed our bottom-line estimates by an average of 39% in the trailing four periods, including a 37% beat in Q2. Analysts also raised their long-term adjusted earnings outlooks since its report to help Garmin grab a Zacks Rank #1 (Strong Buy) right now.

Garmin shares jumped to records following its release, including a solid pop Monday to reach new highs of $161 a share. The stock is now up 60% in the last 12 months to outpace the Zacks Tech Sector’s 40% climb. The recent run is part of a longer stretch that’s seen Garmin surge nearly 200% in the last five years to top its tech sector peers.

GRMN trades at a small discount to the tech sector at 26.5X forward 12-month earnings. This also marks 5% value compared to its own year-long highs, which is solid considering its stock price is at new heights. The big run makes its 1.70% dividend—tops the S&P 500’s 1.30%—all the more impressive and a nice bonus for a growth tech stock.

Garmin also boasts a strong balance sheet and its growth is poised to continue. Current Zacks estimates call for GRMN’s adjusted fiscal 2021 earnings to pop nearly 8% on 18% stronger revenue that would see it pull in $4.94 billion. This would mark its strongest top-line expansion in well over a decade and come on top of double-digit sales growth in the past two years. Plus, Garmin is expected to follow up FY21 with another 8% revenue growth next year and 13% higher earnings.

Microsoft was one of the market movers that failed to sufficiently impress Wall Street last week. But as we discussed in the intro, the fact that MSFT didn’t make a huge post-earnings jump is hardly significant. That said, the tech powerhouse actually did touch new records of $290 a share last week, following a brief dip after its Q4 FY21 release on July 27.

Microsoft’s adjusted earnings climbed roughly 50% and it’s now topped our bottom-line estimates by an average of 17% in the past four quarters. The company’s expansion within cloud computing alongside Amazon (AMZN - Free Report) and others significantly changed MSFT’s growth trajectory, as the space proliferates and becomes a necessity for nearly every industry and company imaginable.

MSFT’s fiscal 2021 revenue climbed 18% to $168.1 billion. Looking ahead, Zacks estimates call for its FY22 revenue to pop another 13%, with FY23 set to grow by 12% to reach $212.4 billion. These projections extend the firm’s streak of between 10% to 18% sales growth to six years. This is a highly impressive run for a company that went public in the 1980s and showcases the strength and consistency of the cloud market. Meanwhile, its adjusted earnings are projected to climb 8% and 13%, respectively.

Microsoft’s positive earnings revisions since its Q4 release help it land a Zacks Rank #1 (Strong Buy) right now, alongside an “A” for Momentum in our Style Scores system. And 19 of the 20 brokerage recommendations Zacks has are “Strong Buys,” with the other at a “Buy.” Plus, the company finished last quarter with roughly $130 billion in cash and equivalents. The firm returned around $10 billion to shareholders via stock buybacks and dividends, up 16% vs. the year-ago quarter. And its 0.80% dividend yield tops AAPL’s 0.60%.

MSFT’s impressive balance sheet and piles of cash will help it continue to make strategic acquisitions. Most recently, the company announced in mid-April its plans to buy Nuance Communications Inc. for $16 billion, making it the second-largest deal under CEO Satya Nadella. Nuance is at the forefront of speech recognition and AI, with its tech set to roll into MSFT’s growing cloud business for healthcare clients and beyond.

More recently, the stock has popped 30% in 2021 to continue to outperform the broader tech market. And despite trading at records, Microsoft sits 8% below its year-long highs at 32.7X forward 12-month earnings.

Buy This Blue-Chip Retail Stock Before Q2 Earnings and Hold?