The company generated net sales of $528 million in the second quarter, climbing 31.4% year over year from $401.9 million. The top line, however, missed the Zacks Consensus Estimate of $559.3 million. Net sales increased around 19% sequentially on higher aluminum prices and increased regional premiums.

Shipments of primary aluminum were 190,894 tons, down 9.2% year over year and 2% sequentially due to disruptions in the supply chain that delayed the pace of restart activities at Mt. Holly.

At the end of the quarter, the company had cash and cash equivalents of $9 million, down 94.8% year over year.

Century Aluminum stated that on the back of continued strength in global aluminum markets, it is focused on adding more production online through its previously announced expansion project at Mt. Holly and a return to targeted production levels at Hawesville. It expects both the projects to be completed by the year end, which will provide the much-needed additional units to the marketplace as well as additional LME and regional premium pricing exposure.

Century Aluminum’s shares have risen 30.9% over the past year, underperforming the 51.3% rise of the industry. 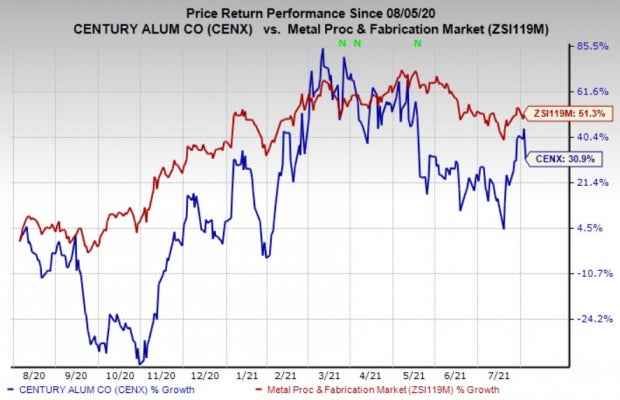 Mueller has a projected earnings growth rate of 154.1% for the current year. The company’s shares have grown 44.3% over the past year. It sports a Zacks Rank #1 (Strong Buy). You can see the complete list of today’s Zacks #1 Rank stocks here.

Terex has a projected earnings growth rate of 2,207.69% for the current year. The company’s shares have jumped 147.2% over the past year. It carries a Zacks Rank #1.

Tenaris has a projected earnings growth rate of 328.6% for the current year. The company’s shares have risen 56.3% over the past year. It carries a Zacks Rank #2 (Buy).