Barring one-time items, earnings came in at $1.82 per share for the reported quarter. It topped the Zacks Consensus Estimate of $1.50.

Net sales climbed around 52% year over year to $435.3 million in the quarter. It, surpassed the Zacks Consensus Estimate of $391.1 million.

Sales rose mainly due to increased volumes (up 40%), including additional net sales from acquisitions of 5%, and favorable foreign currency translation impact of 8%. Volumes were driven by improved end market conditions and market share gains. However, the company faced headwinds from higher raw material costs in the quarter.

The company saw higher sales across all of its segments. Its segments gained from increased sales volumes, acquisitions, favorable currency swings and higher selling prices.

The company expects sustained increase in raw material costs in the third quarter. It is taking additional price increase measure to offset the raw material cost inflation. It sees a more stable raw material environment in the fourth quarter. The company also expects its gross margins for the third quarter to be at or somewhat below its second quarter level before rising in the fourth quarter. While it expects strong demand to continue, it sees some headwinds in automotive due to the semiconductor shortage. Some seasonality trends are also expected in the second half.

Quaker Chemical’s shares have gained 27.2% in the past year compared with industry’s 22.8% rise. 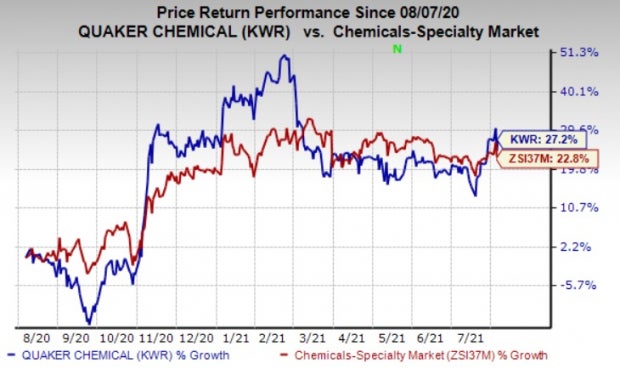 Nucor has a projected earnings growth rate of 455.7% for the current year. The company’s shares have rallied around 129% in a year.

ArcelorMittal has an expected earnings growth rate of 1,731.2% for the current year. The company’s shares have shot up around 192% in the past year.

Olin has an expected earnings growth rate of around 590.4% for the current year. The company’s shares have surged roughly 320% in the past year.

5 Corporate Giants to Buy Ahead of Earnings Results This Month