Westlake Chemical Corporation (WLK - Free Report) recently announced that one of its subsidiaries is set to take over the parent company of Dimex LLC, based in Marietta, OH, from Grey Mountain Partners, a private equity firm.

Dimex produces a wide range of consumer products made from post-industrial-recycled (PIR) polyvinyl chloride (PVC), polyethylene (PE) and thermoplastic elastomer (TPE) materials. It has annualized sales of roughly $100 million. Over the last four years, it secured 29 U.S. patents for its products

Westlake is optimistic about the buyout and noted that the acquisition harps on its commitment toward taking actions in order to contribute to a sustainable and circular economy. Dimex is a reputed processor of recycled plastic materials processing in the United States. It uses its compounds for its own products and Westlake believes that this makes it better positioned to be more client-centric and provide the required engineering, manufacturing and distribution capabilities.

The transaction is subject to customary closing conditions, including the expiration/termination of the applicable waiting period under the U.S. Hart-Scott-Rodino Antitrust Improvements Act of 1976, and is expected to close during the second half of 2021.

Westlake's shares have risen 34% in the past year, slightly underperforming the industry’s 34.5% growth. The estimated earnings growth rate for the company for the current year is pegged at 431.9%. 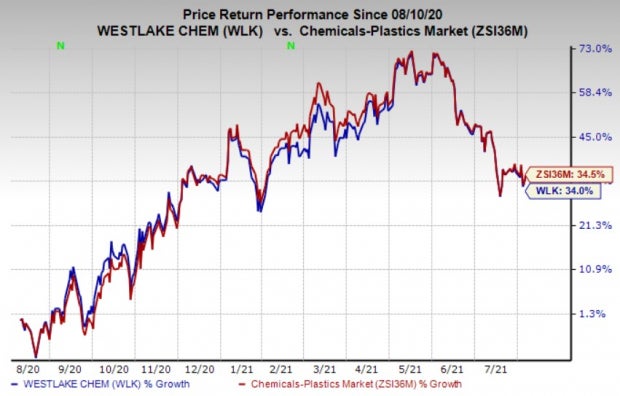 The company noted that it is keen to continue with its business investments going forward. It expects that the recently announced acquisitions of Boral North America and LASCO Fittings, totaling approximately $2.4 billion, will initiate a stage of development and growth for the company. The LASCO buyout is also expected to add to Westlake subsidiary, NAPCO’s product portfolio with a focus on new markets and products. The company is optimistic about strengthening the housing, repair and remodeling markets by leveraging the growth opportunities arising from the acquisitions.

Avient has a projected earnings growth rate of 64.2% for the current year. The company’s shares have jumped nearly 79.8% in a year.

Orion has a projected earnings growth rate of 79.8% for the current year. The company’s shares have jumped 41.7% over the past year.

LyondellBasell has a projected earnings growth rate of 222.6% for the current year. The company’s shares have grown 41.7% over the past year.

Is Highwoods Properties (HIW) a Great Stock for Value Investors?