Agios Pharmaceuticals, Inc. (AGIO - Free Report) announced that the FDA has accepted the new drug application for its lead pipeline candidate, mitapivat, for priority review. The NDA is seeking the approval of the candidate as a potential treatment of adult patients with pyruvate kinase (“PK”) deficiency, a rare, inherited disease. Currently, there is no treatment approved for the given indication.

The priority review has reduced the anticipated timeline for review of mitapivat NDA from 10 months to six months. The FDA will announce its decision onthepotential approval for mitapivat by Feb 17, 2022.

Shares of Agios were up nearly 3% during after-hours trading on Aug 17 with the FDA granting priority review tag to the NDA. The company’s shares have gained 3.1% so far this year compared with the industry’s increase of 3.6%. 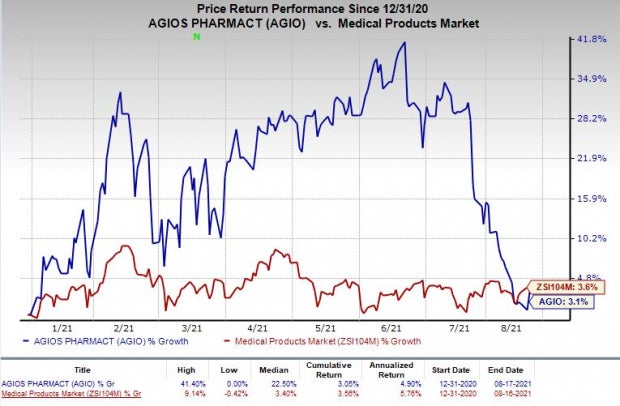 A marketing authorization application, seeking approval of mitapivat for treating adults with PK deficiency in Europe,is also under review.

Upon potential approval and launch, mitapivat can provide a first potentially disease-modifying therapy for people with PK deficiency, thereby serving an area of high unmet medical need. However, the company’s operating expenses will likely go higher in the upcoming quarters to support pre-commercialization and commercialization activities for mitapivat. Moreover, the company is also conducting several clinical studies to support the approval of mitapivat in other hemolytic anemias indications.

We remind investors that Agios completed the sale of its oncology portfolio to France-based pharmaceutical company, Servier, in March 2021. Following this sale, the company’s sole focus now remains on expanding its genetically defined disease portfolio, including the clinical development of mitapivat.

This apart, Agios is also evaluating AG-946, its next-generation pyruvate kinase-R activator, in a phase I study for the treatment of hemolytic anemia.