Masimo Corporation (MASI - Free Report) recently announced the findings of a study published in the Journal of Pain & Relief wherein researchers explored the utility of Masimo Bridge in reducing postoperative opioid needs in patients undergoing kidney donor surgery. Bridge, an auricular field nerve stimulator, was found to be associated with significant reductions in opioid use and pain after surgery.

Based on the positive outcomes, researchers concluded that Bridge may represent a complementary approach to lower postoperative opioid requirement.

Per current estimates, over 83,000 people died in the United States alone from drug overdoses last year, with almost 63,000 of them killed by opioids, and many of them from prescription opioids used post-surgery. Management is optimistic about identifying opioid overdoses early enough to save lives and also expects to be able to avoid the unnecessary use of opioids altogether.

The study sought to assess whether the technique of percutaneous nerve field stimulation might be beneficial during the postoperative period and be an alternative to opioid use. Although opioids are still considered to be required after kidney donor surgery, they have serious proven side effects, including respiratory depression, postoperative nausea and vomiting. Further, opioids expose the donors to an unnecessary risk of opioid use disorder (“OUD”).

Given the current opioid epidemic and associated risk of OUD in surgical patients, researchers are hopeful that the Bridge device may be of significant value in controlling postoperative opioid consumption and pain.

Per a study by Verified Market Research, the global neurostimulation devices market was valued at $11.61 billion in 2020 and is anticipated to reach $27.73 billion by 2028 at a CAGR of 11.5%. Factors like rising prevalence of neurological disorders and increasing demand for minimally invasive technologies are likely to drive the market.

The company, in July, announced robust second-quarter 2021 results where it recorded a strong rebound in sensor sales (on the back of steady expansion of monitoring in hospitals), along with robust order shipments.

The same month, Masimo announced the release of its latest and most advanced rainbow SET board, MX-7. The board has been engineered for integration into numerous multi-parameter monitors available with the company’s various original equipment manufacturing partners.

Also in July, the company announced favorable findings of a study published in the Journal of Critical Care. The study assessed the ability of two parameters (Patient State Index and Suppression Ratio) provided by Masimo SedLine brain function monitoring to predict neurological outcomes and long-term survival in post-cardiac-arrest ICU patients. 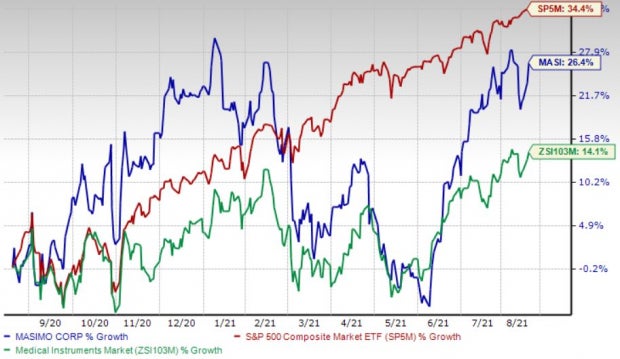