Alibaba (BABA - Free Report) and the rest of Chinese tech have fallen out of market favor with Xi and his increasingly authoritarian communist regime, driving a tidal wave of new regulation washing out trillions in market value. Now I see a short-term swing trade opportunity in a stock that has lost nearly half its market valuation in less than 10 months.

BABA has dropped to its most oversold RSI level since it started publicly trading in the US roughly 7 years ago. Based on recent price action, it is apparent that BABA traders/investors are trying to call a bottom and appear to be utilizing Fibonacci extension levels to do so. I am currently looking for a support level around $161.50, which has held up in today's trade thus far, and at these excessively oversold levels, I don't see how we could go much lower in the short run. 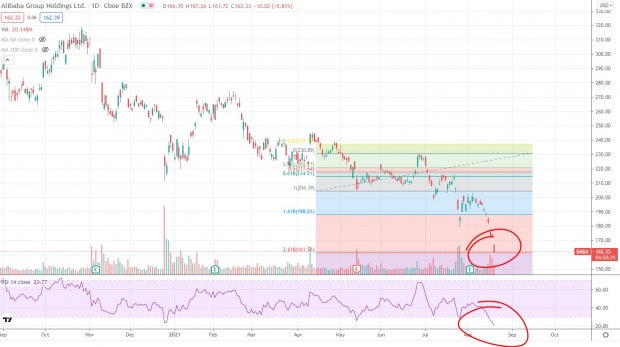 I am buying September monthly call options (9/17 Exp) here, looking for a very near-term pop in the shares purely on these technical levels. Tencent (TCEHY - Free Report) came out this morning and disclosed that they expect to see further regulation on its online service over the next few months, which has investors panic selling everything Chinese.

I wouldn't say that BABA is investible quite yet, as I would need to see some sign that Xi and his administration are loosening their grip. Still, short of any new regulation, BABA is a $300 stock, but as I said, I need to see Beijing officials back off the regulatory frenzy they are on before buying up shares.

The Tidal Wave Of Regulation On China's Big Tech

Alibaba's founder Jack Ma seems to have catalyzed this endless flow of tech-focused regulation in China.

Xi's regime impeded Ma's fintech giant Ant Group's nearly half a trillion-dollar IPO last year. It wiped out more than $100 billion of its market value with a fresh regulatory overhaul aimed at Ant Group's unique micro-lending methods. This move by Chinese officials appeared to be in retaliation to Jack Ma's (founder and owner of the business) public criticism of the republic's financial system. Jack Ma's denouncement of China's economic practices seems to have triggered this fresh wave of tech regulation in the region. Xi fears that he could lose control of the masses to ostentatious billionaires like Ma.

The progressing Chinese communist regime seemingly headed towards capitalism is now reeling back towards what looks like a government-controlled autocratic economy. I don't think China wants US investors to have any stake in its country's tech giants.

Just 2 days after DiDi , the Uber (UBER - Free Report) of China, released its shares to US investors, the Cyberspace Administration in China announced a data-security review of the company that would require them to temporarily halt user growth. DIDI shares have since lost over $50 of their value. In fact, every publicly traded Chinese tech stock has taken a sizable dip since these restrictive announcements became a systemic issue earlier this year.

Xi may have made Chinese tech stocks uninvestable for US money managers today, but that does not mean that they are untradable. BABA is lining up very nicely for a swing trade, and I think it is time to take advantage of this precipitous drop.

I'm looking to be in this options trade for a brief period, hopefully no more than a couple of days.