AES, Borrego Team Up to Build Solar Projects in Michigan

Read MoreHide Full Article
The AES Corporation (AES - Free Report) recently teamed up with renewable energy projects developer, Borrego, to build three utility scale solar projects in Michigan. The projects, which are expected to be online by mid-2022, will have a total installed capacity of 72 megawatt-direct current (MW-DC).
Per the deal, Borrego will engineer and construct these solar plants, which on completion will be owned and operated by AES Corp.

These three solar plants will enable AES Corp to deliver approximately 104,500 MW-hours (MWh) of clean electricity per year, serving more than 9,000 Michigan households.
The projects, once completed, will help to reduce carbon dioxide emissions by approximately 74,057 metric tons.
The aforementioned partnership deal, which will provide access to more than 2.5 million customers, will strengthen AES Corp’s presence in the decarbonization space. This, in turn, will aid the the company in attaining its carbon neutral target by 2050 for all business scopes.

In August 2021, AES Indiana, a subsidiary of AES Corp, announced its plan to acquire and construct a 250 MW solar plus 180 MWh energy storage facility in Pike County. The project if approved is expected to be operational by May 2024. In July, AES Indiana received approval from the Indiana Utility Regulatory Commission (IURC) to acquire the Hardy Hills 195 MW solar project in Clinton County.
In second-quarter 2021, the company signed 1,824 MW of renewables and energy storage under long-term Power Purchase Agreements (PPA), which includes 757 MW of solar and energy storage at AES Clean Energy in the United States and 295 MW of solar and energy storage at AES Indiana. Such a robust pipeline of solar projects highlights the company’s strong growth opportunities in the expanding solar market.

Other Utility companies are also rapidly adopting solar energy to boost their renewable energy portfolio.
For instance, in February, Duke Energy (DUK - Free Report) added four new solar power plants as part of its plans to invest $1 billion in 10 new solar plants across Florida. The move is in sync with its endeavor to expand in utility scale solar space. It has also planned investment of $2 billion in utility scale solar projects for the period 2018-2024.
In August, American Electric Power (AEP - Free Report) subsidiary AEP Energy signed an additional long-term renewable energy purchase agreement with Doral Renewables for the second phase of the 360 MW-DC Mammoth solar project in Indiana. American Electric intends to add 5910 MW of solar resource between 2021-2030.
In June, Xcel Energy (XEL - Free Report) received approval to build solar facility in Western Wisconsin. This 74-MW Mustang solar project will be the largest solar facility in the region.

In the past one year, shares of the company have gained 36.9% compared with the industry's growth of 13.1%. 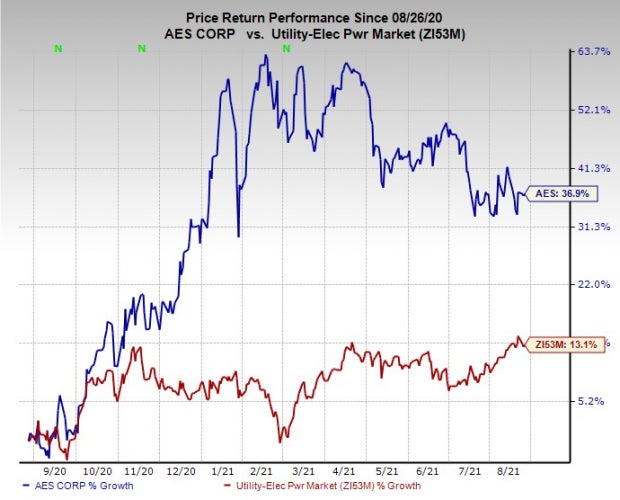 Here's Why You Should Retain Caesars Entertainment (CZR) Stock