Aegis is an integrated missile guidance system used in the U.S. Navy and allied ships to protect the battle group. It is the world’s most advanced combat system that can simultaneously destroy land targets, submarines and surface ships along with providing protection from aircraft, cruise missiles and ballistic missiles.

In May 2021, Lockheed Martin secured a deal worth $10.7 billion from the U.S. State Department for the sale of four Aegis missile defense systems that will serve the Canadian government.
Earlier, in January, the company won a $750 million contract from the U.S Navy to modernize and maintain Aegis Combat Systems for six customers under the foreign military sales program. Such notable contract wins highlight the strong demand that Lockheed’s Aegis system enjoys in the overseas market, apart from its well-established market in the U.S. defense space.

Countries globally have been reinforcing their military resources due to intense geo-political tensions and amplified terrorist threats. This has spurred demand for missile systems. The United States, which is the largest exporter of military weaponries worldwide, is also focused on strengthening its military resources, with Aegis being one of the key defense programs. This is quite evident from the allotment of a $1 billion investment plan in the U.S. fiscal 2022 defense budget for Aegis Ballistic Missile Defense systems. So we may expect a solid flow of contracts from the Pentagon involving Aegis systems, with the latest contract bearing a testament to that.
It is imperative to mention in this context that such budget allocation will not only benefit Lockheed Martin but also Raytheon Technologies (RTX - Free Report) , which is the designated agent and manufacturer of two Aegis components, the SPY-1D(V) Transmitter and the MK 99 Fire Control System.

In the past one year, shares of the company have lost 7.2% against the industry’s growth of 10.4%. 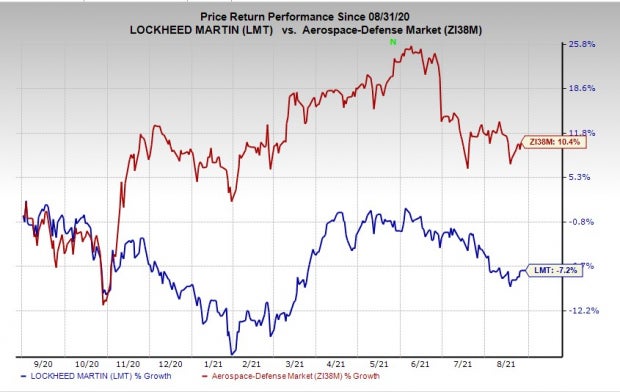