For investors’ note, the study concluded that the time between the fall in ORi and the following decrease in oxygen saturation (SpO2) below their respective benchmarks may allow taking preventive action in order to avoid any adverse situation. It was also determined that a higher ORi value during preoxygenation was individualistically protective against hypoxemia.

The latest positive study outcome is a major stepping stone for Masimo’s patient-monitoring business across the world.

ORi is a non-invasive and continuous trending index that expands oxygen monitoring on patients on supplemental oxygen. It is enabled by the multi-wavelength rainbow Pulse CO-Oximetry platform and is offered alongside SpO2 ascertained by Masimo SET pulse oximetry.

The rationale behind evaluating whether ORi could offer early warnings of imminent hypoxemia during the ETI procedure is the importance of optimizing preoxygenation in patients needing the procedure and the fact that ORi delivers information past the range explored by SpO2.

Additionally, it was noted that ORi monitoring can aid in identifying patients who do not increase their oxygen reserve despite preoxygenation and are therefore at higher risk of desaturation during ETI. Such patients may benefit from a longer preoxygenation period or a change in device. Researchers also noted that a fall in ORi might detect a fault in the preoxygenation technique, such as an insufficient oxygen flow rate or major leaks.

Per a report by MarketsAndMarkets, the global patient-monitoring devices market is projected to reach $55.1 billion by 2025 from $36.4 billion in 2020 at a CAGR of 8.6%. Factors like technological advancements and growing preference for telehealth services amid the pandemic are expected to drive the market.

The company, in August, announced the CE marking and launch in western Europe of Masimo SafetyNet Alert, an arterial blood oxygen saturation monitoring and alert system designed for use at home.

The same month, Masimo announced publication of the findings of a study in the Turkish Journal of Emergency Medicine, in which researchers examined the role that non-invasive continuous Masimo PVi might play in monitoring volume status and volume changes in spontaneously-breathing patients undergoing hemodialysis.

Also in August, the company announced the findings of a study published in the Journal of Pain & Relief, wherein researchers explored the utility of Masimo Bridge in reducing postoperative opioid needs in patients undergoing kidney donor surgery. 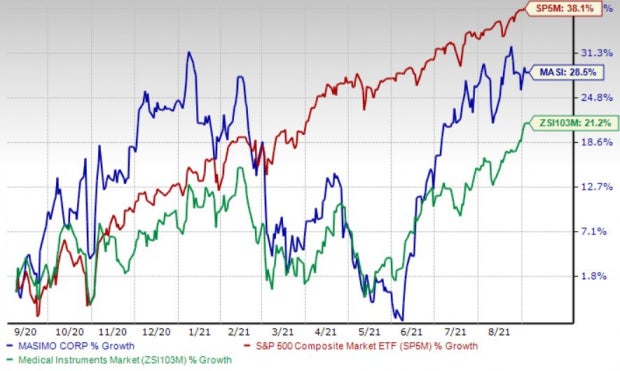