Per the terms, the long-term service includes operation and maintenance of the battery system. The long term service contract also involves future augmentation services, whereinthe company will provide additional installed battery capacity of approximately 300 megawatt-hour (MWh) to be installed on regular frequencies, over the 15 yearperiod.

The growing importance of a carbon-neutral environment has been boosting the solar market’s prospects of late. However, the primary issue withthe solar mode of generating electricity is that itfails to provide electricity 24x7. In this context, battery storage is directly correlated with the penetration of renewable energy as it aids in promoting renewable energy,while reducing dependency onthegrid. Therefore, significant investments in battery storage projects will certainly support energy grids globally.Notably,the United States is a forerunner in this space.

According to a report by Wood Mackenzie, the Americas region will overtake Asia Pacific by 2025 to lead the global storage market, with a total capacity of 371 gigawatt-hour (GWh) in 2030.

Therefore, Canadian Solar has been making significant investments in the United Statesto capitalize on growth opportunities in this space. Notably, in June 2021, the company’s subsidiary,Recurrent Energy,expanded its U.S. energy storage footprint, with several leading Battery Energy Storage Systems contracted, totaling 2.3 gigawatt-hour (GWh) to be built in 2021 and 2022.

As of Jun 30, 2021, the company had a total storage pipeline of 11.6 GWh, including 1.5 GWh under construction, in the United States. Such solid initiatives and pipeline bolster Canadian Solar’s growth prospects in the thriving battery storage market.

To reap the benefits of the expanding battery storage market, other solar players are also taking initiatives.

For instance, Enphase Energy(ENPH - Free Report) introduced its Encharge battery storage system in Germany in July 2021, in a bid to expand its presence in the growing energy storage market. This launch marked Encharge’s first availability in a foreign market.

In the year-to-date period, Canadian Solar’s shares have gained 25.2% compared with the industry’s growthof 18.4%. 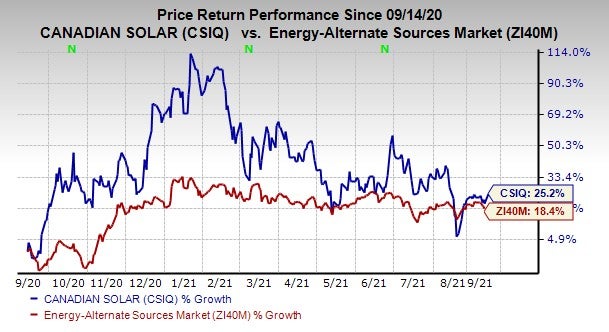 Why is it Worth Retaining Arthur J. Gallagher (AJG) Stock?