For investors’ note, two-year follow-up data was presented in the PACE trial, which showed that men treated with CyberKnife SBRT are less likely to experience long-term side effects over the course of their lives compared with men receiving conventional linear-accelerator-delivered SBRT.

The latest favorable data is expected to be a step forward for Accuray to strengthen its radiation therapy business on a global scale.

Significance of the Trial Results

Prostate cancer treatment with radiation poses a challenge as the prostate gland can move in an unpredictable manner within seconds due to normal bodily functions or even slight patient movement during the procedure. The gland is also surrounded by sensitive organs and tissues.

The CyberKnife System, which is the only robotic radiotherapy delivery system till date, detects this movement and uses artificial intelligence (AI) to synchronize the treatment delivery beam to the prostate's new position in real time throughout the whole treatment session. This automatic synchronization makes significant expansion of treatment margins or repositioning the patient (approaches used by conventional linear accelerators), redundant. The CyberKnife robot, guided by Accuray’s proprietary AI-driven Synchrony technology, can deliver radiation from any angle, thereby maintaining accuracy of the delivery throughout the procedure, even with unpredictable gland movement.

Per an expert associated with the PACE trial, the data from the same has revealed very encouraging results, which suggest that potentially curative prostate radiotherapy can be given with lesser side effects to patients undergoing stereotactic body radiotherapy over five days.

Per management, the PACE trial adds to the available data and provides further convincing evidence of the impact the technology can have on a patient's life and the value it can add to a hospital's prostate cancer treatment program.

Per a report by Industry Growth Insights, the global SBRT market is expected to grow at a CAGR of 5.5% during the forecast period of 2021 to 2028. Factors like rising number of cancer cases and growing awareness about the benefits of radiation therapy are likely to drive the market.

Given the market potential, the latest favorable data are expected to provide a significant boost to Accuray’s business globally.

Accuray has witnessed a few notable developments across its business over the past few months.

In August, the company reported robust fiscal 2021 fourth-quarter revenues, where it recorded uptick in both of its revenue sources (Product and Services). Accuray also received CE Mark for ClearRT Helical kVCT Imaging for the Radixact System during the fiscal fourth quarter.

In June, Accuray, announced that the University of Wisconsin-Madison (UW-Madison) School of Veterinary Medicine team was advancing cancer care by becoming the pioneer in treating an animal using the Radixact System with Synchrony. 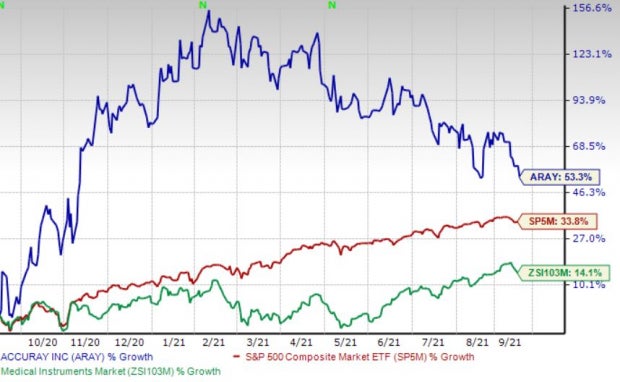