Read MoreHide Full Article
Curtiss-Wright Corporation (CW - Free Report) recently announced that its board of directors has approved an increase of $400 million in its share repurchase authorization. Themove will allow the company to repurchase shares upto $550 million, thus increasingits shareholders’ returnfurther.
The move reflects the financial strength of the company and its ability to generate excess cash flow. With the new authorization, it can immediately repurchase $200 million in additional shares via a 10b5-1 program along with thepreviously authorized $50 million to be repurchased in 2021. This $250 million share buyback is expected to be completed by the end of 2021. Undoubtedly, this repurchase will have a positive impact on earnings per share of the company.
The company plans to offset the potential dilution from compensation plans, through the minimal repurchase of $50 million in shares in 2022 and 2023 under its 10b5-1 program.

Curtiss-Wright’s disciplined capital allocation strategy has supported its commitment to return cash to shareholders. We note that since 2016, the company has consistently repurchased shares backed by strong cash flow generation. It has repurchased more than $630 million in share repurchases since 2016, while also meeting its capital requirements for growth.
Since 2013, the companyhas returned more than $1 billion to its shareholders through share repurchases and dividend payouts. After completing its third share buyback program in first-quarter 2021, it repurchased shares worth $13 million in second-quarter 2021. Itsboard of directors declared a dividend of 18 cents per share, payable Oct 14, 2021.
The solid distribution strategy is backed by its ability to generate strong revenues and free cash flow. Curtiss-Wright expects to witnessa CAGR of 5-10% in revenue growth through 2023.It anticipates generating free cash flow in the rangeof $330 million to$360 million during 2021 via its financial discipline.
Going forward, we believe Curtiss-Wright will continue to perform well and meet its target. The company is focused on returningvalue to its shareholders in the form of dividends and share buyback, and self-funding its growth investment projects.  Curtiss-Wright is a highly attractive stock for income focused investors.

In the past one year, shares of Curtiss-Wright have gained 21.2% compared with the industry’s growth of 7.1%. 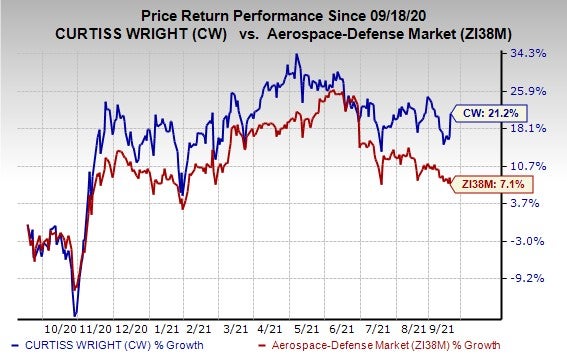