Petroleo Brasileiro S.A. or Petrobras (PBR - Free Report) recently announced that it completed the non-binding phase of the sale of its full 27.88% ownership holding in Deten Qumica S.A. (Deten) and now began the project's binding phase. Prospective buyers who qualified for this phase will get a process letter outlining the divestiture process in full including rules for due diligence and the submission of binding offers.

Earlier in June, the company commenced the sale process of its full ownership in the petrochemical company Deten. Per management, the plan was in sync with the energy player’s strategy to reduce expenses and enhance its capital allocation for maximizing shareholder value.

Located in the Camaçari industrial complex in Bahia, Deten petrochemical is the sole national manufacturer of Linear Alkylbenzene (LAB) and involved in manufacturing and selling major raw ingredients used in the production of biodegradable liquid and powder detergents.

Also, recently, the state-run energy firm decided to divest two of its operated oilfields, namely Urugua and Tambau, located in the Santos Basin off the coast of Brazil.

The oilfields were acquired through the Round Zero of the National Agency for Petroleum, Natural Gas and Biofuels. The company operates with 100% interest in both fields.

The fields are located in the northern part of the Santos Basin between 140 kilometers and 160 kilometers offshore Rio de Janeiro at a water depth of 1,000-1,500 meters. In 2020, the fields produced 5 thousand barrels of oil per day and 32.4 million cubic feet of gas per day.

Petrobras is involved in an extensive divestment program with the aim to pay off debt and free up capital for deepwater offshore projects. The latest transaction is in line with the company’s portfolio optimization strategy as it focuses its resources on high-quality assets in deep and ultradeep waters wherein it showed a great competitive edge over the years.

Petrobras is the largest integrated energy firm in Brazil and one of the biggest firms in Latin America. Its activities include exploration, exploitation and the production of oil from reservoir wells, shale and other rocks. It comprises refining, processing, trading and transportation of oil and oil products, natural gas and other fluid hydrocarbons besides other energy-related operations.

Shares of the company have outperformed the industry in the past year. Its stock has gained 32.9% compared with the industry’s 7.6% rise. 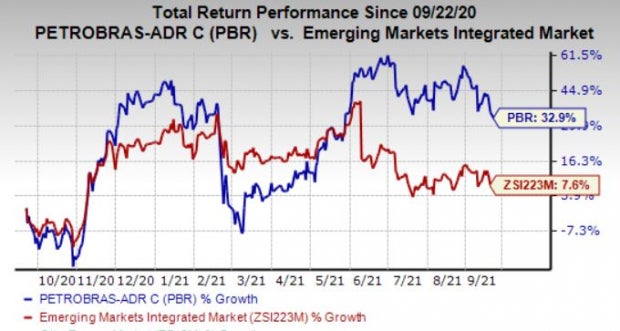 In the past 60 days, the Zacks Consensus Estimate for Canadian Natural’s 2021 earnings has been raised 14.7% while that for Whiting Petroleum and Continental has moved 52.8% and 52.7% north, respectively.