Macquarie Infrastructure Corporation (MIC - Free Report) announced the results of the shareholders’ vote at a special meeting held virtually yesterday. Unanimously, shareholders cast their votes in favor of the divestment of the company’s MIC Hawaii businesses and the Atlantic Aviation business.

Macquarie anticipates the MIC Hawaii businesses’ distribution to be complete in a day and predicts the divestment of the Atlantic Aviation business to consummate in a couple of days. The divestments are in sync with the company’s strategic alternatives (announced in October 2019), which include disposing of businesses to unlock values for its shareholders.

June Announcements: On Jun 14, 2021, Macquarie entered an agreement to divest its MIC Hawaii businesses to Argo Infrastructure’s affiliate. Subject to the receipt of necessary approvals and the fulfillment of customary conditions, the company anticipates the transaction to be complete in the first half of 2022.

Macquarie’s MIC Hawaii segment comprises an energy company — Hawaii Gas — which processes and distributes gas, and provides related services as well as several smaller businesses. These are collectively engaged in reducing costs as well as improving reliability and the sustainability of energy in Hawaii.

On Jun 7, 2021, Macquarie announced that it agreed to divest its Atlantic Aviation business in a transaction worth $4.475 billion to New York-based KKR & Co. Inc.

May Announcement: On May 6, 2021, Macquarie received its shareholder approval to reorganize the company into a listed limited liability company. The reorganization plans, announced in February, will be accomplished before the completion of the Atlantic Aviation divestment.

Earlier Events: In December 2020, Macquarie completed the divestment of its liquid storage and handling business, International-Matex Tank Terminals, for $2.67 billion to an affiliate of Riverstone Holdings, Inc.

With a market capitalization of $3.5 billion, the company currently carries a Zacks Rank #3 (Hold). Cost-control measures, investments in growth opportunities and divestment activities are likely to be beneficial. Higher costs and expenses are concerning.

In the past three months, the company’s stock has gained 4.5% compared with the industry’s growth of 6.3%. 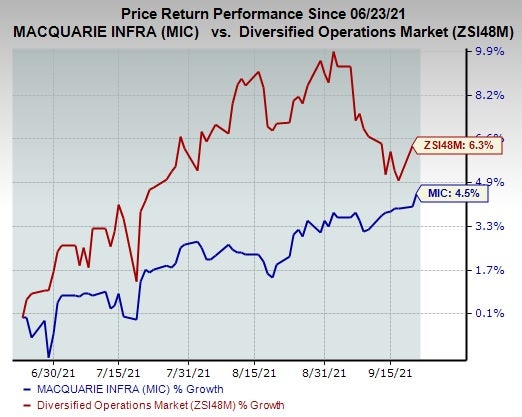 The Zacks Consensus Estimate for Macquarie’s earnings is pegged at $2.12 for 2021 and $2.58 for 2022, reflecting no change from the 60-day-ago figures. Also, the consensus estimate for third-quarter 2021 earnings has been stable at 49 cents in the past couple of months.

In the past 60 days, earnings estimates for the companies have improved for the current year. Also, earnings surprise for the last reported quarter was 3.35% for Carlisle, 100.00% for Raven and 31.65% for Crane.