Over the past five trading days, U.S. telecom stocks continued to mirror the broader benchmark equity indices in a similar trend as the prior week and witnessed a gradual downtrend due to an apparent policy paralysis despite the best intentions of the government to spur a healthy growth momentum. The final passage of the $1.2 trillion infrastructure bill by the House appears to be stuck in a potential stalemate, as several progressive Democrats want the bill to be tied to the larger $3.5 trillion budget reconciliation bill that is facing massive backlash from both Republicans and Democrats. This even forced President Biden to personally meet the dissident groups to seek an early resolution, although it reportedly failed to broker a compromise despite some ‘productive’ discussions. The infusion of federal funds to improve broadband infrastructure for greater access and deeper penetration in the underserved domestic markets is the need of the hour to bridge the digital divide. However, the uncertainty over the much sought-after infrastructure bill that focuses on affordability and low-cost service option has hard hit the industry.

In order to stimulate broadband growth across the country, the U.S. Treasury Department has issued fresh guidelines as to how states should allocate money from the $10 billion Capital Projects Fund created as part of the American Rescue Plan Act of 2021. The instruction set encourages states to prioritize investments in fiber-optic connectivity and developing related infrastructure for the future broadband needs of the communities. It also urges states to pursue projects involving broadband networks either owned or affiliated to the government, non-profit or co-operatives in order to serve larger communities with less pressure on profit-making initiatives.

Meanwhile, China-based Hytera – a supplier of radio equipment to emergency first responders – said in a submission to the FCC that it has been unfairly targeted by the government and argued that its radio equipment do not pose any security risk as they do not use broadband connectivity. It urged the FCC to specify which of its equipment are deemed to be potential threats in order to avoid being hit across its entire business. The developments assume significance as the government is reportedly aiming to ease diplomatic relations with Beijing that have worsened over recent times to improve bilateral trade, as several restrictions and economic sanctions were hurting operations of domestic firms.

1.    Over the past few months, AT&T Inc. (T - Free Report) has taken several strategic decisions to focus more on its customer-centric business model. One of these was the decision to phase out HBO and HBO Max subscriptions through Amazon Prime Video Channels of Amazon.com, Inc., as it aimed to develop direct-to-consumer relationships. As HBO subscriptions officially went off the air from Amazon Prime on Sep 15, AT&T apparently lost about 5 million U.S. subscribers who had signed through Amazon. The company is now aiming to woo back these customers and attract newer ones as well through a discounted price offering as the streaming wars heat up.

HBO Max subscription was originally priced at $14.99 per month. AT&T is presently offering this streaming service at $7.49 per month for six months in a limited promotional deal till Sep 26. The disruptive pricing is lower than the Prime video membership of $8.99 per month, plus taxes and is likely to be a lucrative offer for both existing and new customers. The offer, however, is available to only U.S. customers as AT&T expects to register healthy growth in HBO Max subscribers in international markets.

2.     Verizon Communications Inc. (VZ - Free Report) recently secured a prime contract from the U.S. Department of Defense for an undisclosed amount to provide 5G mobility service to seven Air Force Reserve Command installations. The deal underscores the trust and reliability enjoyed by the carrier as it continues to support the digital transformation initiatives of the federal government.

3.     ADTRAN, Inc. (ADTN - Free Report) recently announced that it has secured multiple partnerships with service providers to deploy its highly scalable fiber access network in the rural regions of the U.K. The Huntsville, AL-based company has collaborated with Alncom, Wildanet, and Netomnia.

The alliances will bridge the digital divide on the back of a cost-effective fiber-to-the-home network, thereby delivering exceptional broadband experiences to customers, particularly based in the underserved areas of the European country.

4.    Viasat, Inc. (VSAT - Free Report) has secured two research contracts from the U.S. Department of Defense (“DoD”) to evaluate the potential and feasibility of 5G connectivity in the battlefield. The Carlsbad, CA-based company has been working with DoD to address challenging communications issues across multiple network domains.

The research contracts, which will be conducted over a span of three years, were awarded through the Information Warfare Research Project. These contracts are part of the $600 million 5G research program that was announced last year by DoD. The initiative aims to assess how the fifth-generation technology can boost warfighting capabilities.

5.    Viavi Solutions Inc. (VIAV - Free Report) recently announced that it has augmented the capabilities of its Xgig 5P16 platform. It now supports multi-user functionality and analyzer bifurcation for multiple users and simultaneous tests on a single platform. The Xgig 5P16 Exerciser platform enables real-time analysis of Peripheral Component Interconnect Express or PCIe 5.0 data traffic at all layers of the stack.

VIAVI Xgig 5P16 Analyzer is specifically designed to modernize data traffic analysis while addressing the growing demands of AI and IoT with enhanced capabilities. The device is reckoned to be the first-of-its-kind solution in the market. The latest move highlights Viavi’s commitment to drive the influence of bandwidth-intensive computing services globally on the back of its technology prowess. 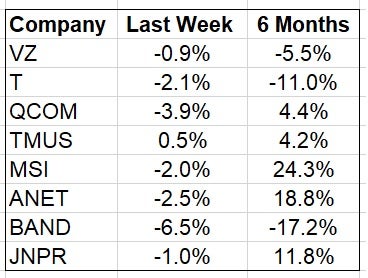 In the past five trading days, T-Mobile was the only stock that gained 0.5%, while Bandwidth declined the most with its stock falling 6.5%.

Over the past six months, Motorola has been the best performer with its stock appreciating 24.3%, while Bandwidth declined the most with its stock falling 17.2%.

Over the past six months, the Zacks Telecommunications Services industry has gained 7.5% and the S&P 500 has rallied 12.7%. 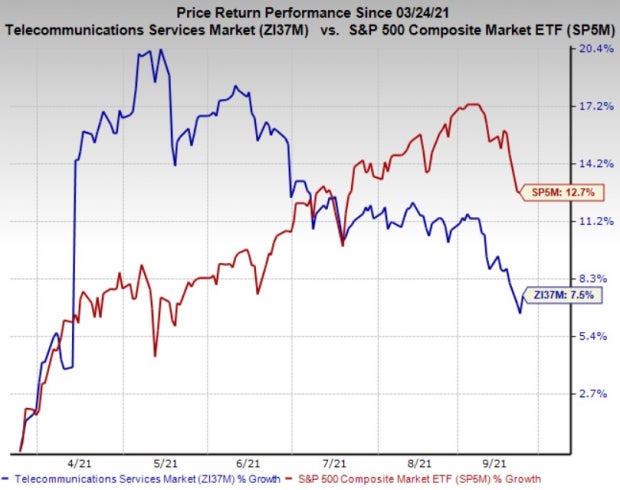